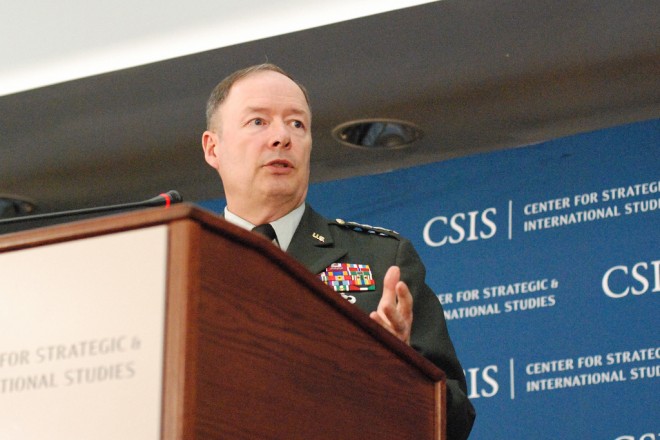 Gen. Keith Alexander is the director of the National Security Agency and oversees U.S. Cyber Command, which means he leads the government’s effort to protect America from cyberattacks. Due to the secretive nature of his job, he maintains a relatively low profile, so when he does speak, people listen closely. On July 9, Alexander addressed a crowded room at the American Enterprise Institute in Washington, D.C., and though he started with a few jokes — his mother said he had a face for radio, behind every general is a stunned father-in-law — he soon got down to business.

Alexander warned that cyberattacks are causing “the greatest transfer of wealth in history,” and he cited statistics from, among other sources, Symantec Corp. and McAfee Inc., which both sell software to protect computers from hackers. Crediting Symantec, he said the theft of intellectual property costs American companies $250 billion a year. He also mentioned a McAfee estimate that the global cost of cybercrime is $1 trillion. “That’s our future disappearing in front of us,” he said, urging Congress to enact legislation to improve America’s cyberdefenses.

These estimates have been cited on many occasions by government officials, who portray them as evidence of the threat against America. They are hardly the only cyberstatistics used by officials, but they are recurring ones that get a lot of attention. In his first major cybersecurity speech in 2009, President Obama prominently referred to McAfee’s $1 trillion estimate. Sen. Joseph Lieberman, I-Conn., and Sen. Susan Collins, R-Maine, the main sponsors of the Cybersecurity Act of 2012 that is expected to be voted on this week, have also mentioned $1 trillion in cybercrime costs. Last week, arguing on the Senate floor in favor of putting their bill up for a vote, they both referenced the $250 billion estimate and repeated Alexander’s warning about the greatest transfer of wealth in history.

A handful of media stories, blog posts and academic studies have previously expressed skepticism about these attention-getting estimates, but this has not stopped an array of government officials and politicians from continuing to publicly cite them as authoritative. Now, an examination of their origins by ProPublica has found new grounds to question the data and methods used to generate these numbers, which McAfee and Symantec say they stand behind.

One of the figures Alexander attributed to Symantec — the $250 billion in annual losses from intellectual property theft — was indeed mentioned in a Symantec report, but it is not a Symantec number and its source remains a mystery.

McAfee’s trillion-dollar estimate is questioned even by the three independent researchers from Purdue University whom McAfee credits with analyzing the raw data from which the estimate was derived. “I was really kind of appalled when the number came out in news reports, the trillion dollars, because that was just way, way large,” said Eugene Spafford, a computer science professor at Purdue.

Spafford was a key contributor to McAfee’s 2009 report, “Unsecured Economies: Protecting Vital Information” (PDF). The trillion-dollar estimate was first published in a news release that McAfee issued to announce the report; the number does not appear in the report itself. A McAfee spokesman told ProPublica the estimate was an extrapolation by the company, based on data from the report. McAfee executives have mentioned the trillion-dollar figure on a number of occasions, and in 2011 McAfee published it once more in a new report, “Underground Economies: Intellectual Capital and Sensitive Corporate Data Now the Latest Cybercrime Currency” (PDF).

In addition to the three Purdue researchers who were the report’s key contributors, 17 other researchers and experts were listed as contributors to the original 2009 report, though at least some of them were only interviewed by the Purdue researchers. Among them was Ross Anderson, a security engineering professor at University of Cambridge, who told ProPublica that he did not know about the $1 trillion estimate before it was announced. “I would have objected at the time had I known about it,” he said. “The intellectual quality of this ($1 trillion number) is below abysmal.”