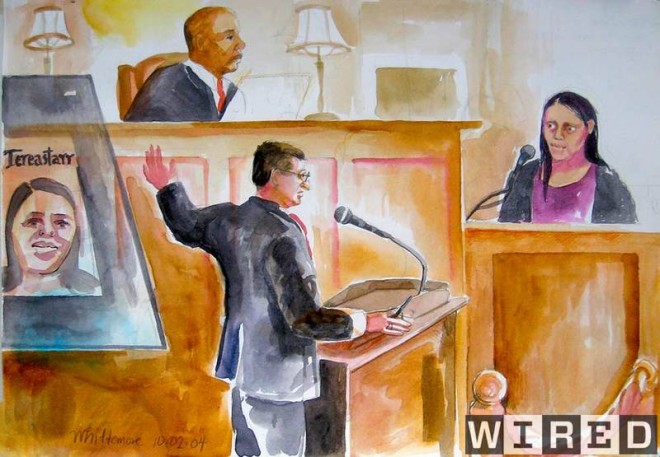 More importantly, the appeals court agreed with the Recording Industry Association of America that judges are virtually powerless to reduce a jury’s verdict in a copyright case. The appeals court, however, sidestepped ruling on the issue of whether the RIAA must prove “actual distribution” of songs in addition to merely making them available on a peer-to-peer network.

Unless there’s an appeal, the decision (.pdf) by the 8th U.S. Circuit Court of Appeals marks the finish to three RIAA trials against the Minnesota woman, who was the nation’s first individual to challenge an RIAA lawsuit in court instead of settling for a few thousand dollars.

The case dates to 2006, and has a tortuous history of three different verdicts for the same offense. Under the case’s latest iteration, a jury last year awarded the RIAA $1.5 million, which the court reduced to $54,000, ruling that the jury’s award for “stealing 24 songs for personal use is appalling.”

The appeals court’s convoluted decision Tuesday, however, found that the $222,000 verdict from the first case should stand and that U.S. District Judge Michael Davis should not have declared a mistrial in that 2007 case over a flawed jury instruction.

In her appeal, Thomas-Rasset argued that the Copyright Act, which allows damages of up to $150,000 per infringement, was unconstitutionally excessive. (.pdf) The Obama administration weighed in too, saying the large damages allowed “is reasonably related to furthering the public interest (.pdf) in protecting original works of artistic literary, and musical expression.”

The only other file-sharer to challenge an RIAA lawsuit was Joel Tenenbaum, a Massachusetts college student. The Supreme Court in May upheld a Boston federal jury’s award of $675,000 for sharing 30 songs.