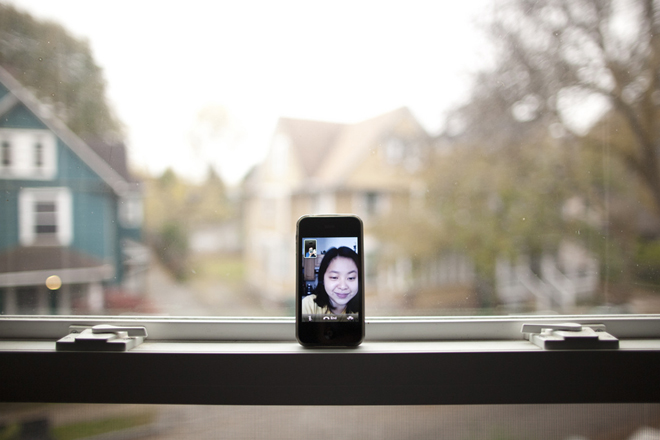 When I learned that Apple would finally be enabling the iPhone’s FaceTime app to work over mobile connections, I was ecstatic. As someone who is deaf, I could now use this one-touch, always-on video chat app to communicate with friends and family in my natural language: American Sign Language (ASL). Born profoundly deaf, Brendan lives in Seattle with his wife, son, and 2 dogs, In his spare time, he enjoys fatherhood, the outdoors, and homebrewing beers with his homebrew club.

But then I found out that AT&T will block mobile FaceTime unless customers sign up for an expensive unlimited voice plan. I wasn’t thrilled with the thought of having to pay this AT&T “deaf tax” just to use the mobile data I’m already paying for.

It’s disappointing that AT&T is standing in the way of innovation that addresses the needs of its deaf and hard-of-hearing customers. Sometimes it takes a while (and some prodding) for technology and technology companies to catch up to and embrace accessibility. In this case the technology is there, but it’s AT&T that’s throwing up the barrier.

FaceTime is a Revolutionary Product

Since the mid-1970s, deaf and hard-of-hearing people been able to make and receive phone calls with the assistance of a Telecommunications Relay Service that enables phone calls through the use of text-input keyboards. A deaf user types a message, which is then translated by an operator speaking to the person on the other end of the phone call. While it is a useful service, TRS still requires typing and communicating via the written word instead of ASL.

This all changed a decade ago when Video Relay Services became widely available. For the first time, it was possible to have phone conversations using ASL.

But soon after, cellphones replaced landlines as the primary mode for phone calls. VRS requires the signer to be in front of a camera-equipped computer or videophone, creating a challenge if you want to make a call while out of the house. Technology keeps advancing, though, and smartphones with video calling apps have the power to create a seamless communications experience for the deaf and hard of hearing.

Video calling changes everything. Not only does it make it easier to take advantage of VRS services, but it allows two people who know ASL to communicate without relying on a third-party interpreter. Apple’s FaceTime is a particularly revolutionary application. I use FaceTime often with family and friends because it’s the easiest way for us to see and sign to each other.

Freeing up FaceTime over mobile would literally change our world. We would be able to communicate with each other during emergencies and other situations when Wi-Fi isn’t available. People who aren’t deaf take for granted that they can dial their partners’ cellphones to remind them to pick up milk, but for the deaf there have always been technological barriers to these kinds of routine communications.

But AT&T isn’t going to allow this revolution in accessibility to be unleashed — not unless customers are willing to buy the company’s pricy unlimited voice plans. AT&T does currently sell a “Text Accessibility Plan” (which it calls “TAP”), which offers deaf users paying $50 a month unlimited texts and 3 gigabytes of monthly data. But again, texting just isn’t the same as signing. Furthermore, according to AT&T’s website, this plan wasn’t extended to include iPhone 4S owners, and it remains to be seen if it will cover the new iPhone. Perhaps the phasing out of these accessibility plans is just AT&T’s way of pressuring consumers into overpaying with their new plans, irrespective of their unique needs or situation.

This isn’t about trying to abuse the system. It’s about the fundamental need to be able to communicate with each other anytime, anywhere — and for the deaf and hard of hearing to be functionally equivalent with hearing people.

FaceTime is a seamless, straight-out-of-the-box video calling solution. Members of my wife’s family switched from the Android platform to iOS to use FaceTime because, well, “it just works.” You look up a contact on your iPhone, and there’s the option to make a FaceTime call listed right next to the voice and texting options.

Third-party apps like Skype require installation, set-up and integration and are not “always on” in the same way FaceTime is. FaceTime’s Wi-Fi limitation has been its only inconvenience, and has led to many missed calls. This is why I personally found AT&T’s assertion that net neutrality rules don’t prevent it from blocking “preloaded” apps like FaceTime so disappointing, and its boasting that it won’t block FaceTime over Wi-Fi so frustrating.

Even if AT&T ultimately decides not to block FaceTime for deaf users on its TAP plan, the company’s plans will still hurt deaf and hard-of-hearing customers. Why? Because the company will still block mobile FaceTime for the people we talk to — our friends and family members who are iPhone users and know ASL, but who are not deaf themselves and thus do not qualify for the TAP plan. The point of having a mobile phone is the ability to be in touch anytime, anywhere — not to have to plan ahead and hope Wi-Fi is available wherever we land.

The bottom line is that data is data. Whatever we pay for, we should be able to use. AT&T needs to rethink this terribly misguided plan and its impact on the deaf and hard of hearing.