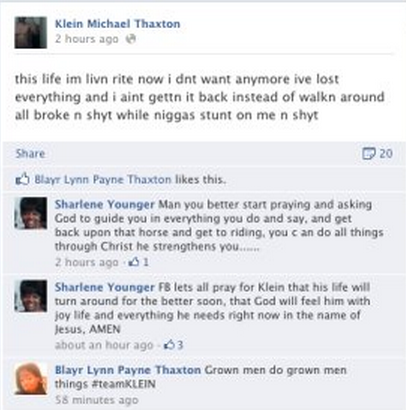 Writing on his Facebook page that he “cant take it no more,” an armed man was posting updates on the social-networking site after taking a man hostage in downtown Pittsburgh.

The profile page of Klein Michael Thaxton went down hours after police said he went into a building while armed and took a man hostage. Thousands of workers in the area were evacuated.

“I cant take it no more im done bro,” he wrote. “How this ends is up to yall bro real shyt.” He also said that “this life im livn rite now i dnt want anymore ive lost everything….”

All the while, before his page went dark, friends were posting on the 22-year-old’s Facebook page.

“Whatevers goin on you can get through this,” one poster wrote.

Hours after the ordeal had begun around 8 a.m. PDT, he surrendered peacefully from the standoff on the 16th floor of Three Gateway Center. No injuries were immediately reported.

Police described him as “ex-military,” and the Pittsburgh Post Gazette said he was arrested in March on carjacking allegations, which gave rise to a police chase.