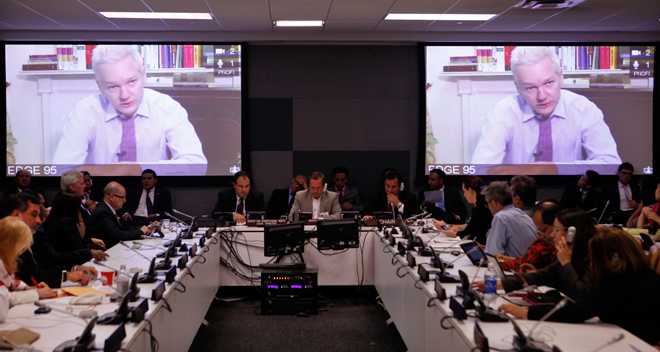 In a rambling speech to a United Nations panel on Tuesday, WikiLeaks founder Julian Assange called on the U.S. to stop “persecuting” WikiLeaks and alleged leaker Bradley Manning.

Speaking at the United Nations General Assembly in New York via a live video feed from the Ecuadorean embassy in London, Assange aligned himself with Manning, discussing the soldier at length for the first time in many months, and referred to the “absurdist neo-McCarthyist fervor” that exists in some parts of the U.S. administration that insist on referring to WikiLeaks as an “enemy” of the state.

Assange was speaking as part of a panel that was supposed to focus on the legal and ethical issues around diplomatic asylum, but instead veered off for a lengthy discussion about U.S. President Barack Obama’s speech at the U.N. this week, which he called “fine words” that needed to be followed up with “fine deeds.”

“It is time for Obama to do the right thing and join the forces of change, not in fine words, but in fine deeds,” he said.

He derided the U.S. for seeming to take credit for the Arab spring, citing the U.S.’s previous support or tacit acceptance of repressive regimes in the region.

At one point, he also recited a biography of Manning’s upbringing in Oklahoma that talked about Manning’s parents falling in love, his father training as an Army intelligence analyst and Manning following in his footsteps.

Assange was speaking from the Ecuadorean embassy, where he has been holed up since June 19 when he sought asylum from Ecuador to avoid being extradited to Sweden where he’s wanted for questioning in a sex-crimes case. Assange could not travel to New York to address the U.N. in person because he has a warrant out for his arrest for breach of bail if he leaves the Ecuadorean embassy.

Among those on the panel were Ecuadorean Foreign Minister Ricardo Patino and Baher Azmy, the legal director of the Center for Constitutional Rights.

Azmy, who did focus on the diplomatic issue, noted that if Assange were anyone else, he would be granted asylum in the U.S. for his role in whistle blowing.

“If Julian Assange were not Julian Assange, he would have a very good case for political asylum in the United States for the activities he undertook,” Azmy said. “Of course, he is public enemy number one and a so-called enemy of the state and is therefore unlikely to get a fair trial” should he be extradited to the U.S.

The Ecuadorean government granted Assange asylum last month but has yet to figure out a way to get him out of that country without being arrested by U.K. authorities.

U.K. Foreign Secretary William Hague has said that no one, least of all Ecuador, “should be in any doubt that we are determined to carry out our legal obligation to see Mr. Assange extradited to Sweden.”

Swedish authorities have said that Assange will be imprisoned as soon as he arrives in that country and would have a court hearing four days after extradition from the U.K. to determine if he would have to remain in custody.

Ecuadorean officials have said they are meeting with U.K. authorities on Thursday in the hope of negotiating a solution that would provide Assange with safe passage out of the U.K. One possible solution Ecuador has considered is for U.K. authorities to provide Assange with safe passage to the Ecuadorean embassy in Sweden, where he can be questioned by Swedish authorities, under the protection of Ecuador, without being arrested.

Assange is not, in fact, accused of political crimes.

He is being sought for questioning in Sweden on rape and coercion allegations stemming from separate sexual relations he had with two women in that country in August 2010. One woman told police that Assange pinned her down to have sex with her and that she suspected he intentionally tore a condom he wore. The second woman reported that he had sex with her while she was initially asleep, failing to wear a condom despite repeated requests for him to do so. Assange has denied any wrongdoing, asserting that the sex in both cases was consensual.

Ecuadorean Foreign Minister Ricardo Patino said last month that Ecuador granted Assange asylum after it considered his claims that if extradited to Sweden he would be further extradited to the U.S. where he would face a possible military court trial for publishing documents that have angered the U.S. government. He said that Ecuador had come to its decision after failing to obtain assurances from Sweden that it would not extradite Assange to the U.S.