Open Season On Patents Starts Thursday, Thanks to Crowdsourced Platform 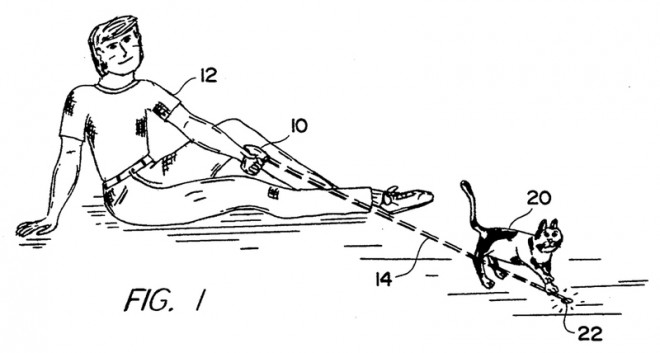 This drawing is from a patent granted in 1995 for a laser used to entertain a cat.

Hunting season is now open on software patents , and the U.S. Patent and Trademark Office, Stack Exchange and Google are teaming up to make it easy for geeks to shoot down overbroad and ridiculous patents.

Thanks to a change in patent law that went into effect this month, third parties who think a patent application is flimsy or invalid due to previous art or obviousness can now file evidence and comments to the USPTO, starting Thursday morning. Previously, it was illegal for the USPTO to take outside parties comments into account when evaluating a patent application.

Making the process even easier, Stack Exchange, the popular Q&A site for coders, has teamed up with the Patent Office and Google to crowdsource analysis of patents before they are issued.

The way it works is simple.

Visit patents.stackexchange.com, and you can find a list of patents that others have submitted for debunking or you can submit your own candidate. Users can then find prior art, discuss the patent’s validity, and ultimately submit their evidence directly to the USPTO with the click of a button. Rounding out the partnership, Google’s handy patent search site will show links to Stack Exchange discussions about patents surfaced in search results.

Given the scope of the ludricrous patent battles that are engulfing the world’s largest tech companies and sinking small startups, the partnership comes none-too-soon. Just this week a little known company based in a patent-friendly Texas town filed suit against some of the net’s giants including Apple, Rackspace and Github, citing, among other things, what seems to be a patent on using hashes to identify multiple copies of the same file. That’s just the most recent example in a long litany of frivolous patent lawsuits, many of them brought by so-called patent trolls, who have no business other than extracting rents from companies who often find it cheaper to settle with trolls than to battle in court.

Stack Exchange has been beta-testing the patent-busting forum and users have been questioning patents ranging from Microsoft’s recent application for a patent on hitting a phone to silence it  (discussion here) to a patent on bed management system in a healthcare facility.

Alex Miller, Stack Exchange’s chief of staff, says the patent forum a natural fit for its site, given its community of software engineers feels very strongly that out-of-control software patents are stifling innovation. (For a fantastic primer on software patents, listen to this American Life episode created in conjunction with NPR.)

“We think this is a powerful way to empower people,” Miller said. “Plus there’s a side benefit. At its heart Stack Exchange is a Q&A community of experts and this should bring more experts to contribute to the site.”

Though there’s no set rewards yet for busting a patent, Miller says Stack Exchange is thinking about giving a badge to those who bring down a patent application.

Miller said the PTO ended up working with Stack Exchange thanks to a 2007 collaborative experiment spearheaded by New York Law School professor Beth Noveck called Peer to Patent, which tested the idea of crowdsourced patent testing of patents submitted by applicants who agreed to be vetted. Though the experiment was limited, the site proved that “crowdsourcing can work,” according to Miller.

Noveck recently suggested that the PTO talk with Stack Exchange, which then approached Google about integrating its patent search engine. Google quickly agreed, according to Miller. Now, the trio has created a tri-part process Miller calls Discover, Discuss and Document.

That’s some clever marketing. We can only add “Let the hunting begin.”