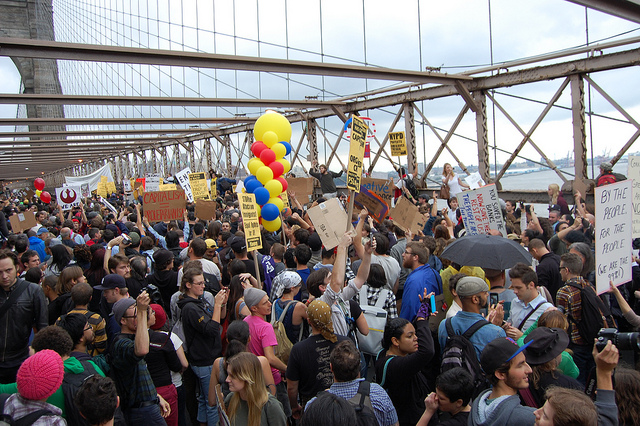 Twitter on Friday reluctantly complied with a judge’s order to divulge the tweets and account information connected to an Occupy protester.

The case concerns Malcolm Harris, who was among hundreds arrested last October for disorderly conduct in an Occupy movement march along the Brooklyn Bridge.

Prosecutors sought tweets made by Harris’ account “to refute the defendant’s anticipated defense, that the police either led or escorted the defendant into stepping onto the roadway of the Brooklyn Bridge.”

The case was being closely watched as the authorities increasingly monitor and move to access material posted on social networks. The development comes two months after the micro-blogging site reported that, for the first six months of the year, the authorities sought information on Twitter user accounts 679 times, and Twitter produced some or all of the information 75 percent of the time.

The social media giant filed an appeal in late August asking the New York appeals court to reconsider Manhattan Criminal Court Judge Matthew A. Sciarrino’s earlier rulings ordering it to give state authorities tweets and account information on two Twitter accounts used by Harris. Sciarrino denied Twitter’s request to stay the order until the appeals court ruled on it.

The judge demanded Twitter release the data or hand over its confidential earnings statements from the last two quarters so he could determine how much of a fine to levy against the company. Twitter, which keeps such financial data secret, had until Friday to produce the data.

Twitter again Friday asked the court to stay his order until after Twitter’s appeal is heard in November, but that plea was rejected. Terryl Brown, Twitter’s attorney, told the court that “Twitter is being given a fundamentally unfair Hobson’s choice that is contrary to the core of our justice system of being compelled to either waive its right to appeal so that novel legal issues may be adjudicated on the merits, or being held in criminal and/or civil contempt.”(.pdf)

The judge’s July ruling said that, “If you post a tweet, just like if you scream it out the window, there is no reasonable expectation of privacy. There is no proprietary interest in your tweets, which you have now gifted to the world. This is not the same as a private e-mail, a private direct message, a private chat, or any of the other readily available ways to have a private conversation via the internet that now exist. Those private dialogues would require a warrant based on probable cause in order to access the relevant information.”

The judge said he would read the since-deleted tweets privately before allowing any into the case. In a bid to corroborate that the tweets were posted by Harris, the judge required Twitter to turn over the account information connected to the account of @destructuremal, including any information Twitter had about the owner of the account, including his e-mail address. The authorities believe that account belongs to Harris and in a post online, Harris confirmed the accounts were his.

In its appeal, (.pdf) Twitter wrote that Harris’ tweets are protected by the Fourth Amendment “because the government admits that it cannot publicly access them, thus establishing that defendant maintains a reasonable expectation of privacy in his communications.” The Twitter accounts in question have been closed and are no longer publicly available.

The case began in January, when the district attorney in Manhattan asked Twitter to hand over all tweets posted to the account of @destructuremal between September 15 and December 31, as well as any information Twitter had about the owner of the account, such as a user name, e-mail address or IP addresses used to access the account to post the tweets. In March, the government served Twitter with a second order for records related to a different Twitter account, @getsworse, also believed to belong to Harris.