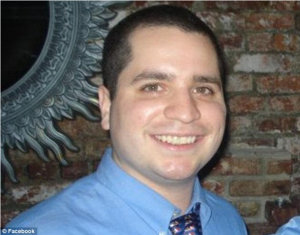 A New York City cop arrested Thursday for being part of a conspiracy to kidnap, rape, cook and eat women is being charged, in part, with violating computer crime laws for using a federal law enforcement database to track a potential victim.

Active-duty New York City police officer Gilberto Valle is accused of plotting with multiple people to kidnap a number of women. The FBI says they found dossiers on 100 potential female victims on his computer and that they interviewed 10 of them, who all say they know Valle. One of his co-conspirators allegedly planned to rape one of the women and then cook her, alive, in a cage.

In addition to one count of conspiracy to kidnap, Valle faces one count of violating computer crime law by accessing the FBI’s National Crime Information Center (NCIC) database to glean information on a woman identified only as Victim 3. According to the criminal complaint (.pdf), Valle exceeded his authorization to use the database around May 31, and did not have authorization to search for Victim 3.

Valle allegedly wanted to become a professional kidnapper and was asking $5,000 to kidnap a woman and deliver her, alive but unconscious, to an unnamed conspirator.

According to chats in the complaint, Valle reluctantly declined to stick around for the proposed rape and cooking, citing his desire to maintain his professionalism.

“It is going to be so hard to restrain myself when I knock her out, but I am aspiring to be a professional kidnapper and that’s business,” Valle allegedly wrote. “But I will really get off on knocking her out, tying up her hands and bare feet and gagging her. Then she will be stuffed into a large piece of luggage and wheeled out to the van.”

According to the complaint, the FBI was told by a New York Police Department officer about Valle’s alleged NCIC search, but it’s not clear if that evidence comes from NCIC audit logs or from a fellow officer’s observation of the search.

If true, it would hardly be the first time that government databases were abused by people in power for stalking. Just this February, for instance, a former police officer discovered that her DMV records had been accessed by 104 officers in 18 different agencies.