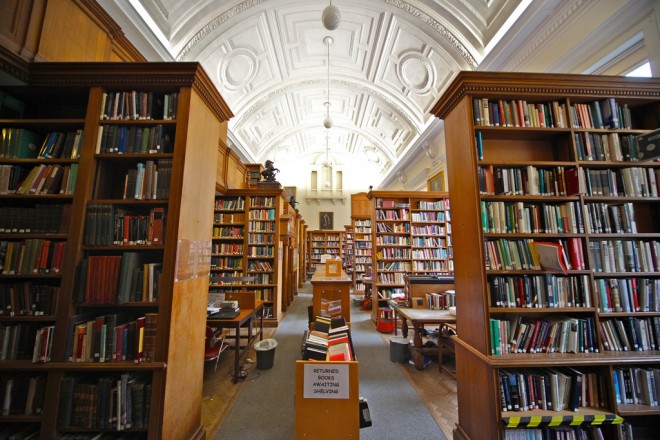 A federal judge on Wednesday threw out a copyright infringement lawsuit against universities that participated in a massive book-digitization project in conjunction with Google without permission from rights holders.

U.S. District Judge Harold Baer of New York dismissed an infringement lawsuit brought by the Authors Guild and other writers’ guilds, saying the universities had a fair use defense. The guild accused the University of California, University of Wisconsin, Indiana University, Cornell University and University of Michigan of wanton copyright infringement for scanning and placing the books into the so-called HathiTrust Digital Library.

The trust consists of 10 million digital volumes, 73 percent of which are protected by copyright. The trust provides full-text searches only with a rights holder’s permission, and gives full-text access for readers with “certified print disabilities,” Baer said.

Google has scanned the books for the universities as part of its Google Books project. The Authors Guild is suing Google in related litigation, which is stalled on appeal. Several publishers, also suing Google, settled with Google last week for undisclosed terms.

Fair use is a defense to copyright infringement and may be invoked for purposes such as criticism, commentary, news reporting, teaching, scholarship or research, the judge noted. He said the Americans With Disabilities Act (ADA) also played a major factor.

“Although I recognize that the facts here may on some levels be without precedent, I am convinced that they fall safely within the protection of fair use such that there is no genuine issue of material fact,” Baer wrote. “I cannot imagine a definition of fair use that would not encompass the transformative uses made by defendants … and would require that I terminate this invaluable contribution to the progress of science and cultivation of the arts that at the same time effectuates the ideals espoused by the ADA.”

Google made a deal in 2005 with these universities to scan millions of books in their libraries without the rights holders’ permission, and make “snippets” of those books available online via Google’s search engine. The Mountain View, California, search giant was subsequently sued by individual writers, publishers and the Authors Guild — litigation that has had a tortured history.

HathiTrust Digital Library was an undertaking by the universities to make the scanned copies available to students and faculty members, and audible for the vision-impaired.

Last week, Google and five of the nation’s largest publishing houses settled their long-running legal flaps over the media giant’s scanning of the university library books without permission. The deal is a huge concession by Google, which had maintained it had a fair-use right under copyright law and did not need permission from rights holders to scan the digital library of the future.

The publishers are not a part of the trust litigation. Under terms of the trust, full-text searching is only available to works in the public domain. Copyrighted works in the trust require consent from the rights holder. If consent is not granted, a search query only indicates the page number in a work on which a searched term is found.

U.S. District Judge Denny Chin of New York last year rejected a deal with the Authors Guild and Google that would have allowed Google to scan copyrighted books (including ones whose copyright owners could not be found), sell them on the internet and have them pop up in search results, while allowing up to 20 percent of the text to display in a search.

The rights holders would have gotten 67 percent of the take and Google the remainder. But when it came to millions of so-called orphaned works, Google’s proposal went too far, Chin said. Under the deal, Google would also have been able to scan and sell titles whose rights holder could not be located, setting aside the proceeds if the author turned up later. In rejecting the deal for orphaned works, Chin said Congress, not private parties, should “establish a mechanism for exploiting unclaimed books.”

Litigation between the guild and Google is stalled, as a federal appeals court weighs the judge’s decision to certify the guild’s suit as a class action.

But Wednesday’s decision suggests that the guild’s arguments are vulnerable, even if Google’s use of the scanned books goes further than the universities’ trust does.