For those looking to artificially inflate their Facebook stats to impress people or drive sales, there’s a new alternative to begging or bribing people for “Likes.” Now you or your friends can just simply send a raft of private messages that include a link to your page, and Facebook will add +2  to your page’s “Like” count for each message.

It’s long been known that Facebook scans internal messages for spam and security risks — and that it blocks users from sending links to torrent sites such as The Pirate Bay. But Facebook has never been clear how much data-mining its doing of users’ private conversations. It turns out, at least some is provably going on.

The Wall Street Journal‘s Digits Blog, with the help of researcher Ashkan Soltani, reported on a video showing the “Like” pumping and reproduced it:

The video, which was posted this week on Hacker News, showed a person who sent links in Facebook messages in order to inflate the number of “Likes” a page had received. Each time the link was sent, the page’s “Like” count went up by two, something that the Hacker News poster said allows people to “pump up to 1,800 ‘Likes’ in an hour.”

“If [you’re] visiting an online store and you see a lot of likes under the product then this might cloud your judgement,” one commenter wrote.

The video has since been taken down for violating YouTube’s restrictions on the depiction of “harmful activities,” but the behavior was also confirmed and recorded by Digits. There’s also a page that you can use to test this yourself. As of this afternoon, sending this link in a Facebook message boosted the “Like” count by two each time.

That’s a pretty great little hack, but evidently, it’s not a bug. It’s something actually noted in the documentation for developers.

Still, faked stats are better in my book than the bought ones – where companies give discounts or hide music/videos behind a ‘Like’ wall. But given that Facebook is now letting brands and even people pay to flood their messages onto others’ walls, it’s way too late to be crying that Facebook is supposed to be a genuine social space.

Absolutely no private information has been exposed and Facebook is not automatically Liking any Facebook Pages on a user’s behalf.
Many websites that use Facebook’s ‘Like’, ‘Recommend’, or ‘Share’ buttons also carry a counter next to them.  This counter reflects the number of times people have clicked those buttons and also the number of times people have shared that page’s link on  Facebook.  When the count is increased via shares over private messages, no user information is exchanged, and privacy settings of content are unaffected. Links shared through messages do not affect the Like count on Facebook Pages.
We did recently find a bug with our social plugins where at times the count for the Share or Like goes up by two, and we are working on fix to solve the issue now. To be clear, this only affects social plugins off of Facebook and is not related to Facebook Page likes. This bug does not impact the user experience with messages or what appears on their timelines.
That said, user demographics of those who share via Facebook messages are included in the stats seen by page owners, according to Soltani.
Here’s a screenshot of what that looks like: 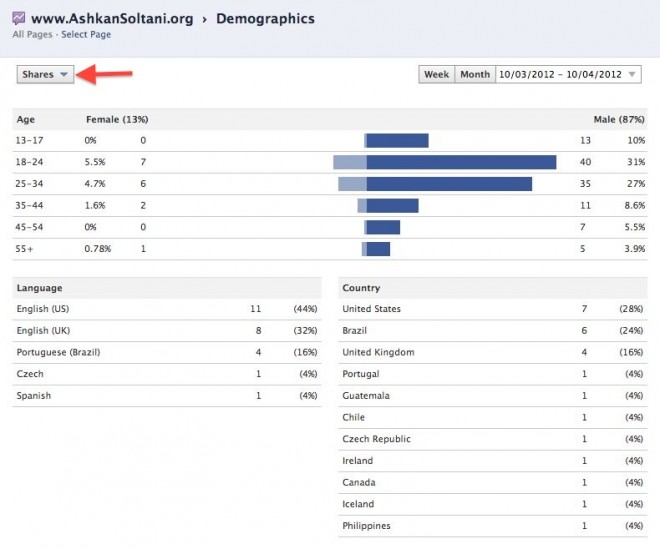