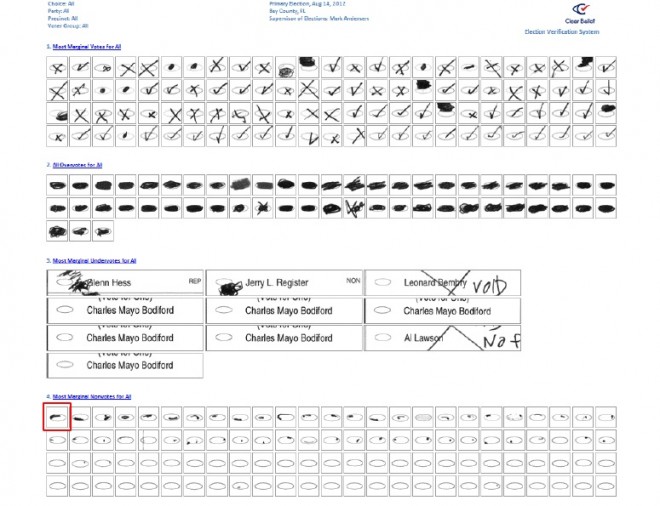 When voting system activists in the U.S. managed to get many paperless electronic voting machines replaced a few years ago with optical-scan machines that use paper ballots, some believed elections would become more transparent and verifiable.

But a spate of problems with optical-scan machines used in elections across the country have shown that the systems are just as much at risk of dropping ballots and votes as touchscreen voting machines, either due to intentional manipulation or unintentional human error.

A new election system promises to resolve that issue by giving election officials the ability to independently and swiftly audit the performance of their optical-scan machines.

Called Clear Ballot, the system is patterned in part after an auditing system that was used in California in 2008. It uses high-speed commercial scanners made by Fujitsu, as well as software developed by the Clear Ballot team, which includes a former developer who worked under Ray Ozzie to create Lotus Notes.

Ballots are first scanned in voting machines made by the vendors before they’re scanned a second time in the Clear Ballot Fujitsu scanner. The Clear Ballot counting software, which sits on a laptop connected to the Fujitsu scanner via USB cable, then processes the ballot images to produce results that can be compared against the vendor machine results.

The software allows election officials to quickly identify ballots that may be causing a discrepancy – such as ones in which voters filled in ovals incorrectly or insufficiently – and pull up ballot images and other visual displays (.pdf) so that election officials can make judgment calls about the voter’s intent and whether a particular mark should be counted as a vote. 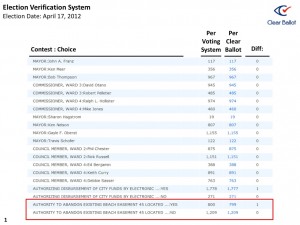 “We produce a result, and we subject that number against the voting system’s number, and ideally the [discrepancy] is zero,” Moore says. “But if it’s not, we have provided a very efficient way, and a visual way, of helping an election official resolve why the discrepancy occurred.”

California, as well as many other states, require post-election manual audits of a certain percentage of precinct ballots – often 1 percent of precincts randomly chosen – as a way to detect voting machine glitches or manipulation. But the manual audits can take a week or longer and clash with deadlines for certifying an election.

The time period for certifying an election differs between states, but Florida has one of the tightest certification windows — just seven days. Once an election is certified, it takes a concerted legal effort to get a recount.

Earlier this year, a county in Florida had to reverse the certified results in a race for council seats after an audit showed that the losers in the race were actually the winners. The problem was attributed to voting machine software made by Dominion/Sequoia Voting Systems.

Clear Ballot’s aim, Moore says, is to give election officials a way to swiftly verify election results before they certify elections. The system, he says, can begin producing results within minutes after the polls close on election night.

Clear Ballot also aims to reduce the price of conducting audits. Moore wouldn’t say how much the Clear Ballot system will cost, but he says they hope to meet or beat the current cost of doing manual counts. He noted that Leon County, Florida, which has about 180,000 registered voters, has paid about $18,000 for post-election audits in the past.

After Leon County supervisor of elections Ion Sancho invited Clear Ballot to audit archived ballots from the 2008 presidential election, the Clear Ballot system uncovered 40 ballots that had gone uncounted in that election. The voting machine scanner had ignored the ballots because election workers had torn off a small part of the bottom of one page when they separated the two-page ballots.

Over-votes are ballots in which a voter marks too many choices in a single race. Optical-scan voting machines are supposed to detect and reject such ballots when they’re scanned so that voters can re-do their selections. But the Clear Ballot test showed that some machines weren’t doing this properly.

“The results so far have really shown the accuracy of well-calibrated machines run by well-oiled election departments, but what they’ve also shown is that there is a tremendous opportunity for human error, and we needed a system that catches that — if not the worst case [scenario], which is fraud,” says Moore.

In the upcoming presidential election, the Clear Ballot system will be auditing ballots in seven counties — Leon, Citrus, Bay, Okaloosa, Indian River, Madison and Duval County. The test will involve about 900,000 two-page ballots, the majority of them in Duval County, which has about 550,000 registered voters.

Since the seven counties use different optical-scan voting machines, the election will help Clear Ballot pit its system against voting machines made by all three of the top vendors – Election Systems and Software, Dominion/Sequoia Voting Systems, and Premier/Diebold.

The system is patterned in part after an audit program that a California county implemented in 2008, which helped uncover 216 ballots that the voting machine had missed.

Humboldt County, a small county in northern California, implemented a pilot project that year called the Transparency Project in order to serve as a check against the Premier/Diebold optical scan machines the county was using. Under the program, every paper ballot scanned by the Premier/Diebold machine was also digitally scanned by a separate commercial scanner not made by a voting machine company.

After completing both scans, officials discovered the discrepancy of 216 ballots. The problem was eventually attributed to the Premier/Diebold software, which randomly deleted entire batches of ballots due to a software error that the company subsequently fixed.

So far, Moore says they do not intend to make their software open source so that it can be examined by others, but he did not rule this out for the future. The company does, however, make its source code available to election districts that have requested it.

Doug Jones, associate professor of computer science at the University of Iowa, and co-author of the book Broken Ballots, says he’s pleased to see the Clear Ballot system being tested in elections.

“It’s a really interesting idea and it’s clever,” says Jones, who has been a long-time critic of electronic voting machines. “If I were setting out to build something I could corrupt, it’s really hard to figure out how to go about it with the architecture they have. I’d love to see them go open source, but … even if they’re a totally closed shop, as long as they’re totally independent of the vendors, it strikes me as a good idea.”