Bradley Manning Offers to Plead Guilty to Partial Charges, Including Leaking to WikiLeaks 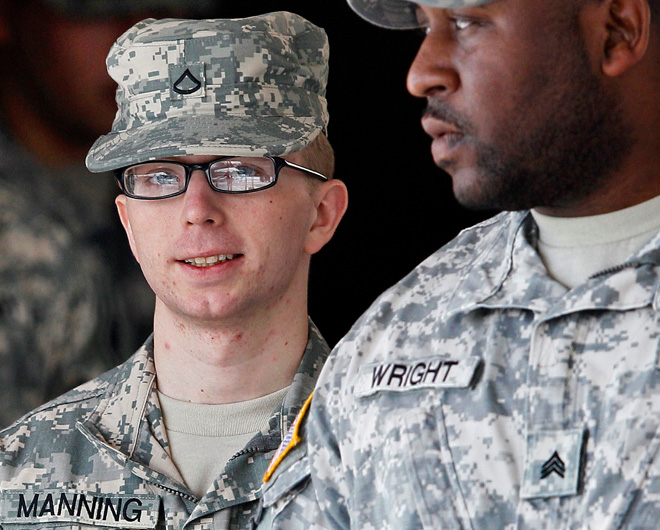 In a surprising turn of events, accused WikiLeaks leaker Bradley Manning offered on Wednesday to plead guilty to parts of the charges he is facing, in exchange for the government pursuing lesser charges.

Manning did not plead guilty but indicated in a plea notice submitted by his attorney, David Coombs, that he is willing to accept responsibility for some of the lesser included charges, but not the charges as they stand in whole.

The move is known as “pleading by exceptions and substitutions” and is a strategy for negotiating the charges against him, which his attorney has tried repeatedly to do, unsuccessfully, via other means during pre-trial hearings.

Defense attorney Coombs wrote on his blog that Manning “is not pleading guilty to the specifications as charged” by prosecutors, but rather “is attempting to accept responsibility for offenses that are encapsulated within, or are a subset of, the charged offenses.”

This includes pleading guilty to providing hundreds of thousands of documents to WikiLeaks, according to blogger Kevin Gosztola, who was at a hearing for Manning on Wednesday and broke the news. But it might not include pleading guilty to the espionage charge that Manning is facing or to aiding the enemy or exceeding authorized access on government networks.

“Coombs told the court Manning had submitted a plea notice indicating he would would accept general responsibility for providing all charged information to WikiLeaks,” Gosztola noted.

The move would help his attorney focus his defense on fewer points of contention, since it would take parts of the charges off the table at trial, though not eliminate charges in their entirety, which is what he has previously tried to do.

Manning’s attorney likely made the move in an effort to obtain a cap on sentencing that would hold even if he’s found guilty of the more serious charges to which he doesn’t plead guilty now, says Lisa Windsor, a retired Army colonel and former JAG officer now practicing military law with the New York law firm of Tully Rinckey. Manning currently faces life in prison if convicted of all the charges. The most serious charge — aiding the enemy — carries a possible death penalty. Prosecutors have already said they will not seek the death penalty, however.

Manning’s attorney may also be hoping that the government will simply drop the more serious charges once he offers to plead guilty to the lesser included ones.

Windsor says she does not recall any cases that proceeded to trial after a defendant pleaded guilty to lesser included charges or used the “exceptions and substitutions” plea.

“Usually the accused pleads guilty and that’s it, or you have a contested trial,” she says. Having a case go to trial with a mixed plea – where some charges are pleaded and others are not – is unusual.

“Ideally if you offer to plead guilty you want the other charges to be dropped, but I don’t think that’s going to happen in this case,” she says, given the extensive number of charges Manning is facing, and the unusual nature of the case.

“Pleading by exceptions and substitutions, in other words, does not change the offenses with which PFC Manning has been charged and for which he is scheduled to stand trial,” Coombs wrote.

Coombs has tried unsuccessfully both to have the number of charges against his client reduced — they currently stand at 22 charges — and to have the most serious charges of espionage and aiding the enemy dropped.

Manning also told the court on Wednesday that he was electing to have a trial by military judge, instead of a trial by jury. His trial is currently set for February.

In online chats with former hacker Adrian Lamo, Manning boasted of leaking a separate video related to the notorious 2009 Garani air strike in Afghanistan that WikiLeaks has previously acknowledged is in its possession, as well as the large databases that later formed WikiLeaks’ most high-profile releases. Those include over 250,000 U.S. diplomatic cables, more than 400,000 U.S. Army reports from the Iraq War and some 90,000 reports from the Afghanistan War.