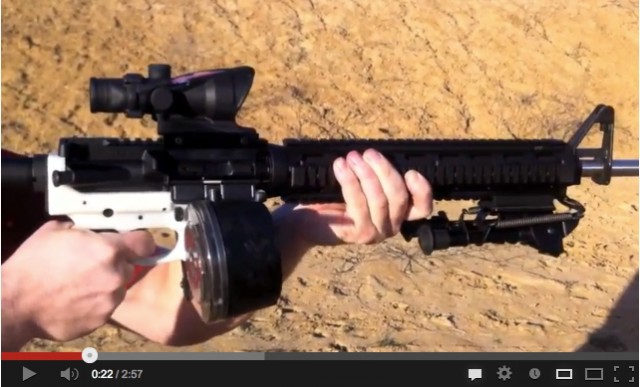 The white portion of this AR-15, known as the "lower," was manufactured using 3D printing.
Defense Distributed

Cody Wilson, like many Texan gunsmiths, is fast-talkin’ and fast-shootin’—but unlike his predecessors in the Lone Star State, he’s got 3D printing technology to help him with his craft.

Wilson’s nonprofit organization, Defense Distributed, released a video this week showing a gun firing off over 600 rounds—illustrating what is likely to be the first wave of semi-automatic and automatic weapons produced by the additive manufacturing process.

Last year, his group famously demonstrated that it could use a 3D-printed “lower” for an AR-15 semi-automatic rifle—but the gun failed after six rounds. Now, after some re-tooling, Defense Distributed has shown that it has fixed the design flaws and a gun using its lower can seemingly fire for quite a while. (The AR-15 is the civilian version of the military M16 rifle.)