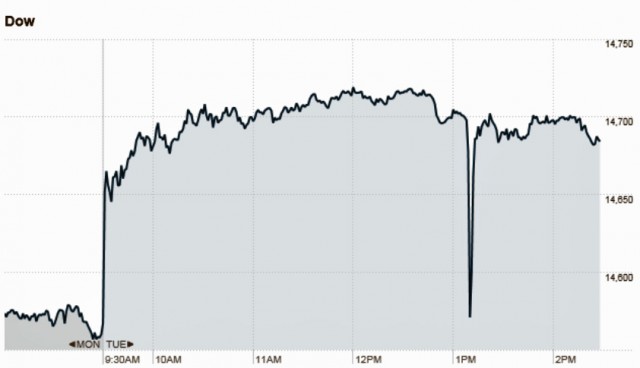 The seven-minute drop in the Dow Jones Industrial Average touched off by a single tweet falsely claiming the White House had been bombed. It temporarily wiped out about 1 percent of the average, which can translate into millions or billions of dollars in market capitalization.

Stock prices plunged and then quickly recovered after a Twitter account belonging to the Associated Press was hacked and used to send a bogus report falsely claiming that the White House had been bombed and President Obama was injured.

In a testament to the power that social media has on real-world finances, the Dow Jones Industrial Average fell 150 points, or about 1 percent, immediately following the tweet, with other indexes reacting similarly. The Dow quickly regained the lost ground about seven minutes after the sell-off began, when the AP confirmed that the report was false.