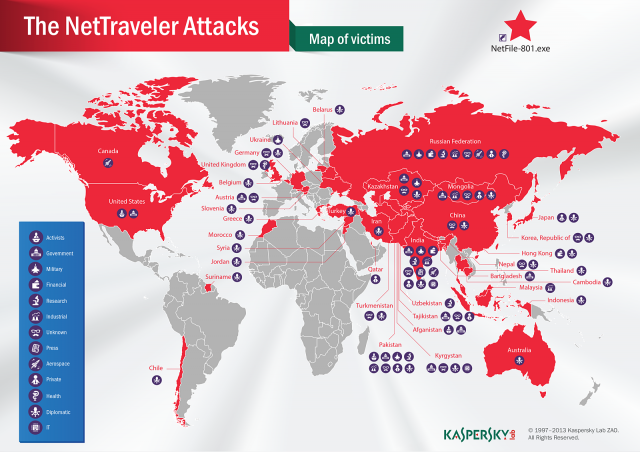 Security researchers have blown the whistle on a computer-espionage campaign that over the past eight years has successfully compromised more than 350 high-profile targets in 40 countries.

"NetTraveler," named after a string included in an early version of the malware, has targeted a number of industries and organizations, according to a blog post published Tuesday by researchers from antivirus provider Kaspersky Lab. Targets include oil industry companies, scientific research centers and institutes, universities, private companies, governments and governmental institutions, embassies, military contractors, and Tibetan/Uyghur activists. Most recently the group behind NetTraveler has focused most of its efforts on obtaining data concerning space exploration, nanotechnology, energy production, nuclear power, lasers, medicine, and communications.

"Based on collected intelligence, we estimate the group size to be about 50 individuals, most of which speak Chinese natively and have working knowledge of the English language," the researchers wrote. "NetTraveler is designed to steal sensitive data as well as log keystrokes and retrieve file system listings and various Office and PDF documents."