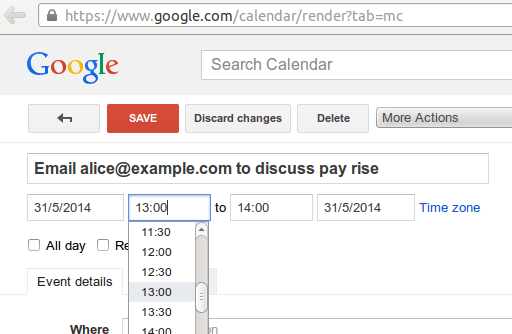 It's a feature that has bitten Google Calendar users in the past, but it's worth a reminder: in some cases, the widely used service may unexpectedly leak sensitive information to bosses, spouses, or just about anyone else.

The inadvertent leakage stems from Google Calendar's quick add feature, which is designed to automatically add the who, what, and where to events without requiring a user to manually enter those details. Typing "Brunch with Mom at Java 11am Sunday" is intended to schedule the event for the following Sunday morning at 11 and list the place as "Java." Participants can be added by listing their e-mail addresses, and in many cases, Google will respond by automatically adding an entry to the participants' calendar as well.

Google heavily promoted this time-saving feature during the rollout of its mail and calendar services. But as documented as early as 2010, the behavior can also result in the leakage of private information for people who are unaware of it. Alas, almost four years later, it's still catching some people by surprise. Blogger Terence Eden explained how an entry his wife put in her personal Google Calendar made its way to her boss. It read: "e-mail [boss's address] to discuss pay rise" and included a date a few months in the future. The boss quickly received the reminder as an entry in her own Google Calender.