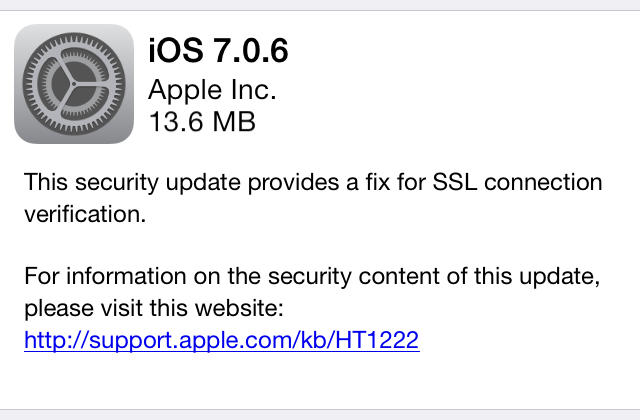 Apple has just released iOS 7.0.6, the sixth minor update to iOS 7. Both it and the new iOS 6.1.6 update "provide a fix for SSL connection verification," their only documented addition. Unlike iOS 7.0.5, which applied only to a few international iPhone 5S and 5C models, the version 7.0.6 update applies to all devices that can run iOS 7. iOS 6.1.6 applies to the iPhone 3GS and fourth-generation iPod touch.

The update to iOS 6 is marginally more interesting than the iOS 7 update, just because Apple has so rarely patched old iOS versions after they've been replaced. The company also released version 6.1.5 for the fourth-generation iPod touch to correct a FaceTime connectivity issue. It's possible that Apple is trying to provide critical security updates to older devices dropped by newer iOS updates, something it also does for older OS X versions for a while after they're superseded by newer software.

The next major iOS 7 update is iOS 7.1, currently in its fifth developer beta. Current rumors suggest it will be released to the public in early or mid-March, and it should include more significant fixes than the six minor updates we've seen since September.