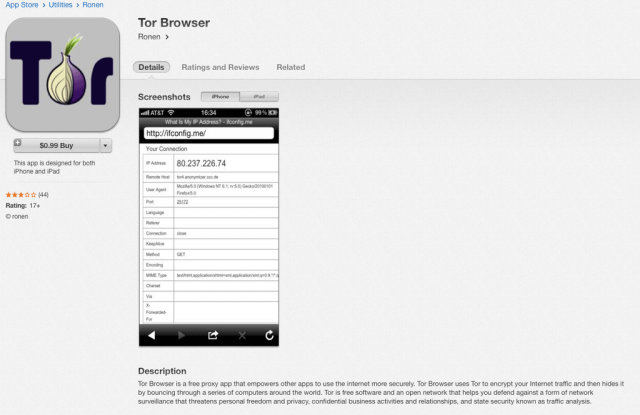 High-ranking members of Tor complained this app is a fake. Four months later, it was still available in Apple's App Store.

Members of the Tor anonymity service are warning that a Tor iOS app available in Apple's highly curated App Store since November is a fake that is laced with adware and spyware.

"Tor Browser in the Apple App Store is fake," a report ticket published two months ago on the Tor website by high-ranking volunteer Phobos stated. "It's full of adware and spyware. Two users have called to complain. We should have it removed."

The ticket went on to say that Tor officials notified Apple of the fake Tor Browser app in December. In the intervening time, the app has remained available, touching off a series of exchanges among Tor members about how to respond. Ars was unable to confirm the claims of adware or spyware. Still, the incident highlights the lack of transparency in the way that Apple vets the reliability of security apps and responds to complaints of rogue titles.