Kremlin gets DDoS’d by Anonymous Caucasus 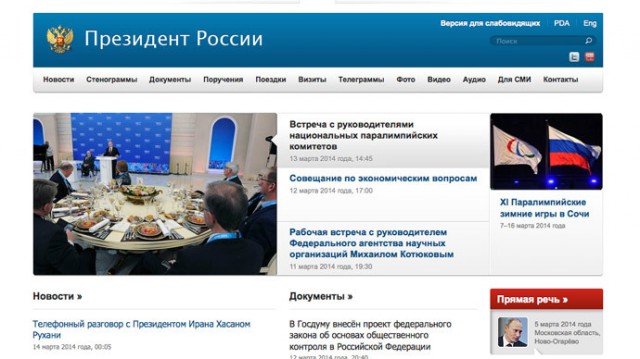 The website Kremlin.ru, the page of the office of Russian Federation President Vladimir Putin's government, was taken offline this morning by a distributed denial of service attack.

In the latest round of a wave of cyberattacks on Russian targets, the official websites of the Russian Federation’s president and central bank were taken offline this morning in what the Kremlin’s press office called a “serious DDoS attack.” The attack also targeted “a number of other Web portals,” according to the Kremlin statement. The sites are back online for most users, but the attack is still ongoing.

Anonymous Caucasus, the “Electronic Army of the Caucasus Emirate,” has claimed responsibility for the attack on its Facebook page with a statement saying, “This is just warming up, Russian pig!”

According to a report from the state-sponsored RT.com, the Russian Foreign Ministry’s site was also disrupted today, following a number of attacks on the websites of Russian media outlets on Thursday. Anonymous Caucasus also claimed responsibility for attacks on a site operated by the largely state-owned national television network Russian Channel One and the Russian DDoS attack protection firm Esteq, stating through Twitter that it had “nothing to do with Ukraine, or all current events in this country.”