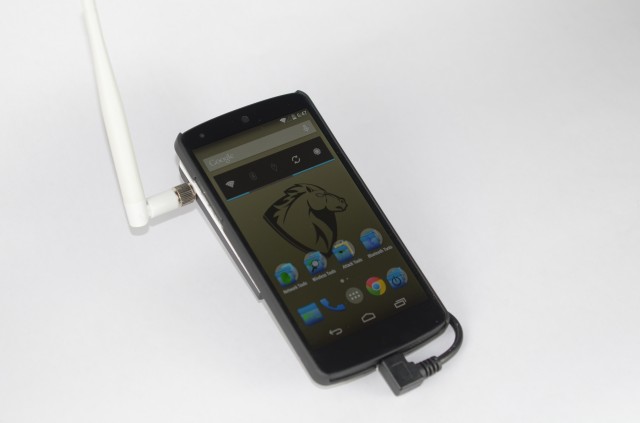 The Pwn Phone, with its external Wi-Fi adaptor case jacked into its USB port, is prepared to do evil for your network's own good.

Mobile technology has made it possible for people to do an amazing amount with tablets and smartphones within the workplace—including hacking the living daylights out of the corporate network and other people’s devices. Pwnie Express is preparing to release a tool that will do just that. Its Pwn Phone aims to help IT departments and security professionals quickly get a handle on how vulnerable their networks are in an instant. All someone needs to do is walk around the office with a smartphone.

Pwnie Express’ Kevin Reilly gave Ars a personal walk-through of the latest Pwn Phone, the second generation of the company’s mobile penetration testing platform. While the 2012 first-generation Pwn Phone was based on the Nokia N900 and its Maemo 5 Linux-based operating system, the new phone is based on LG Nexus 5 phone hardware. However, it doesn’t exactly use Google’s vanilla Android.

“What we’ve done is taken Android 4.4 Kit Kat and recompiled the kernel,” said Reilly. “On the backend, it runs our own derivative of Kali Linux, called Pwnix. Essentially it’s running a full-blown Debian OS on the back-end of Android.“