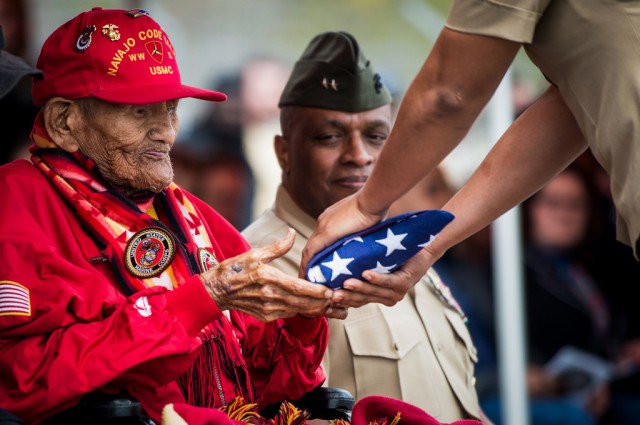 US Marine Corps Cpl. Chester Nez receives an American flag from Pfc. Tiffany Boyd, at Code Talker Hall, Marine Corps Base Quantico, VA, April 4, 2014. The flag was flown over the Marine Corps War Memorial, on the first day of spring, in honor of Cpl. Nez's attendance at the Platoon 382 Hall rededication. Cpl. Nez was the last of the original 29 Navajo Code Talkers of World War II.
Marine Corps

On Wednesday Chester Nez, one of the 29 original Navajo code talkers who worked for the US during WWII sending secret messages in their native language, died in his home in Albuquerque, New Mexico. Nez was 93, and his death was confirmed by Judy Avila, who helped him write his memoirs, according to The Los Angeles Times.

Nez was one of the first code talkers recruited for the job in 1942, while the US was seeing its codes broken over and over again by Japanese code breakers. According to AZCentral, he was in tenth grade when he was recruited by US Marines, who came to his boarding school in Arizona looking for native Navajo speakers.

Navajo has a complex grammar, and at the time there were few, if any, written records of the language. CNN notes that Nez and his peers were forbidden to speak Navajo growing up—until, of course, they were needed to devise a code based on the language. The 29 Navajo men attended boot camp at Camp Pendelton in California and there devised a dictionary with special words for military terms that did not exist in Navajo. They then memorized that dictionary, as the Naval History and Heritage Command recounts: