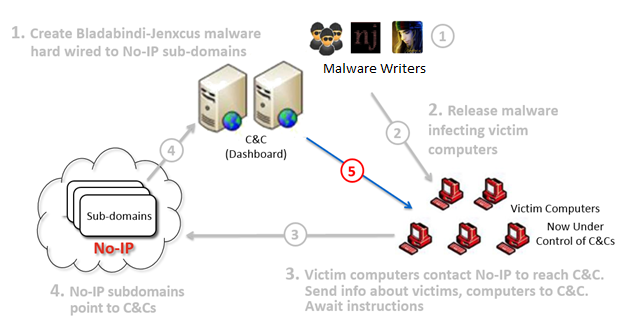 Millions of legitimate servers that rely on dynamic domain name services from No-IP.com suffered outages on Monday after Microsoft seized 22 domain names it said were being abused in malware-related crimes against Windows users.

Microsoft enforced a federal court order making the company the domain IP resolver for the No-IP domains. Microsoft said the objective of the seizure was to identify and reroute traffic associated with two malware families that abused No-IP services. Almost immediately, end users, some of which were actively involved in Internet security, castigated the move as heavy handed, since there was no evidence No-IP officially sanctioned or actively facilitated the malware campaign, which went by the names Bladabindi (aka NJrat) and Jenxcus (aka NJw0rm).

"By becoming the DNS authority for those free dynamic DNS domains, Microsoft is now effectively in a position of complete control and is now able to dictate their configuration," Claudio Guarnieri, co-founder of Radically Open Security, wrote in an e-mail to Ars Technica. "Microsoft fundamentally swept away No-IP, which has seen parts of its own DNS infrastructure legally taken away."