Yahoo Chief Information Security Officer Alex Stamos announced today at Black Hat 2014 that starting in the fall of this year, the purple-hued company will begin giving users the option of seamlessly wrapping their e-mails in PGP encryption. According to Kashmir Hill at Forbes, the encryption capability will be offered through a modified version of the same End-to-End browser plug-in that Google uses for PGP in Gmail.

The announcement was tweeted by Yan Zhu, who has reportedly been hired by Yahoo to adapt End-to-End for use with Yahoo Mail. Zhu formerly worked as an engineer at the Electronic Frontier Foundation, an organization that has consistently been outspoken in its call for the widespread use of encryption throughout the Web and the Internet in general. 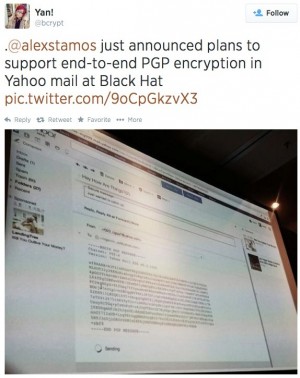 In an interview with the Wall Street Journal, Stamos acknowledged that the introduction of encryption will require some amount of education for users to make sure their privacy expectations are set appropriately. For example, he explained that PGP encryption won’t cloak the destination of your e-mail. "We have to make it clear to people it is not [a] secret you’re emailing your priest, but the content of what you’re e-mailing him is secret," Stamos said.