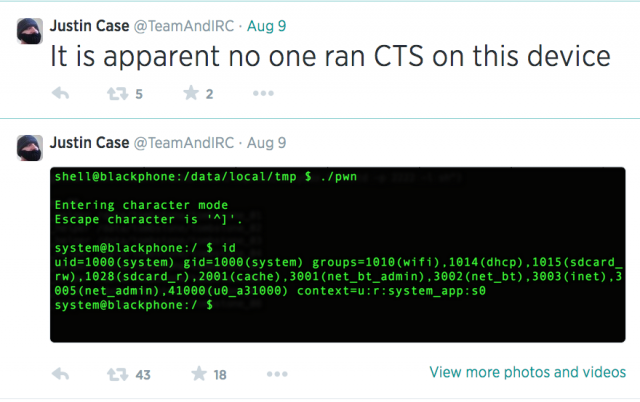 When the Blackphone team arrived at Def Con last week, they knew they were stepping into a lion’s den. In fact, that's exactly why they were there. The first generation Blackphone from SGP Technologies has been shipping for just over a month, and the company’s delegation to DefCon—including Silent Circle Chief Technology Officer Jon Callas and newly hired SGP Technologies Chief Security Officer Dan Ford—was looking to both reach a natural customer base and get help with further locking down the device.

Ask and you shall receive. Jon “Justin Case” Sawyer, the CTO of Applied Cybersecurity LLC, walked up to the Blackphone table at Def Con and told them he rooted the phone. And those who followed him on Twitter received an abbreviated play-by-play.

What followed, however, was not what Sawyer or the Blackphone team counted on: a BlackBerry blogger at N4BB leapt on one of Sawyer’s tweets and wrote a story with the erroneous headline, “Blackphone Rooted Within 5 Minutes.” By the time Sawyer was presenting on Sunday at Def Con with Tim Strazzere, the story had been picked up by a number of blogs and websites—and nearly all of them didn’t bother getting further details from Sawyer or Blackphone.