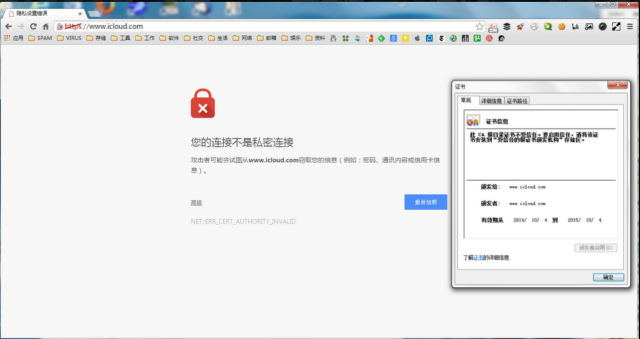 A screen capture shows the warning of a fake iCloud.com certificate—signed by an official Chinese certificate authority.
GreatFire.org

GreatFire.org, a group that monitors censorship by the Chinese government’s national firewall system (often referred to as the “Great Firewall”), reports that China is using the system as part of a man-in-the-middle (MITM) attack on users of Apple’s iCloud service within the country. The attacks come as Apple begins the official rollout of the iPhone 6 and 6 Plus on the Chinese mainland.

The attack, which uses a fake certificate and Domain Name Service address for the iCloud service, is affecting users nationwide in China. The GreatFire.org team speculates that the attack is an effort to help the government circumvent the improved security features of the new phones by compromising their iCloud credentials and allowing the government to gain access to cloud-stored content such as phone backups.

Chinese iCloud users attempting to log in with Firefox and Chrome browsers would have been alerted to the fraudulent certificate. However, those using Mac OS X’s built-in iCloud login or another browser may not have been aware of the rerouting, and their iCloud credentials would have been immediately compromised. Using two-step verification would prevent the hijacking of compromised accounts.