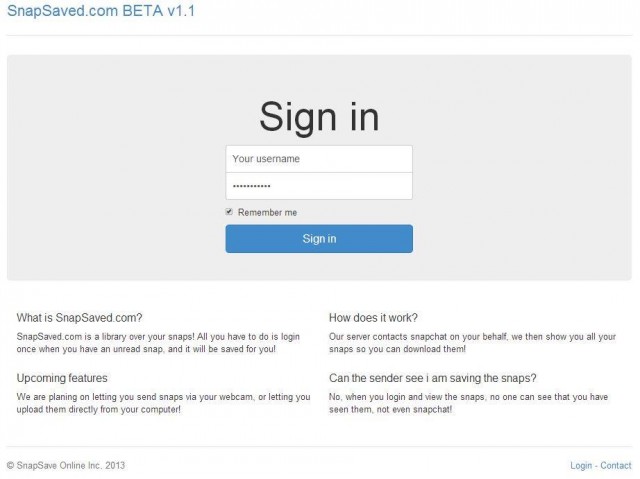 A screenshot of the log-in for SnapSaved.com, a failed (or perhaps malicious) web-based front end for Snapchat that saved users' private images and allowed them to be hacked.
SnapSaved.com

A cache of about 13 gigabytes of stolen images from Snapchat—some of them apparently of nude, underage users of the “ephemeral” messaging platform—was posted online Thursday night, many of them to the image-sharing site 4chan’s /b/ discussion board. However, the threads linking to the images have largely been shut down by 4Chan over concerns of trafficking in what could be considered child pornography. Over 100,000 user images and videos were in the cache, according to 4chan discussions.

The images are apparently not from Snapchat’s own network but from the database of a third-party application that allows Snapchat users to save images and videos sent over the service online. In an official statement to the press, a Snapchat spokesperson said, “We can confirm that Snapchat’s servers were never breached, and were not the source of these leaks. Snapchatters were victimized by their use of third-party apps to send and receive Snaps, a practice that we expressly prohibit in our Terms of Service precisely because they compromise our users’ security.”

According to a report by Business Insider, 4chan users who gained access to the images downloaded them and started to create a searchable database indexed by the usernames associated with the images. The files were also briefly hosted on a Web server that hosted Web exploits and malware.