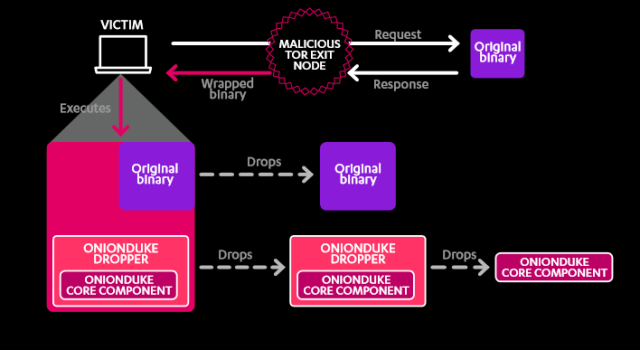 The attack pattern of OnionDuke, one of the many tools in the Russian cyberespionage group The Dukes' tookit.
F-Secure

For the past seven years, a cyberespionage group operating out of Russia—and apparently at the behest of the Russian government—has conducted a series of malware campaigns targeting governments, political think tanks and other organizations. In a report issued today, researchers at F-Secure provided an in-depth look at an organization labelled by them as “the Dukes,”which has been active since at least 2008 and has evolved into a methodical developer of “zero-day” attacks, pulling together their own research with the published work of other security firms to provide a more detailed picture of the people behind a long-running family of malware.

Characterized by F-Secure researchers as a “well resourced, highly dedicated and organized cyberespionage group,” the Dukes have mixed wide-spanning, blatant “smash and grab” attacks on networks with more subtle, long-term intrusions that harvested massive amounts of data from their targets, which range from foreign governments to criminal organizations operating in the Russian Federation. “The Dukes primarily target Western governments and related organizations, such as government ministries and agencies, political think tanks and governmental subcontractors,” the F-Secure team wrote. “Their targets have also included the governments of members of the Commonwealth of Independent States; Asian, African, and Middle Eastern governments; organizations associated with Chechen terrorism; and Russian speakers engaged in the illicit trade of controlled substances and drugs.”

The first known targets of the Dukes’ earliest-detected malware, known as PinchDuke, were some of the first known targets were associated with the Chechen separatist movement, by 2009 the Dukes were going after Western governments and organizations in search of information about the diplomatic activities of the United States and the North Atlantic Treaty Organization. While most of the attacks have used spear phishing emails as the means of injecting malware onto targeted systems, one of their attacks have spread malware through a malicious Tor exit node in Russia, targeting users of the anonymizing network with malware injections into their downloads.