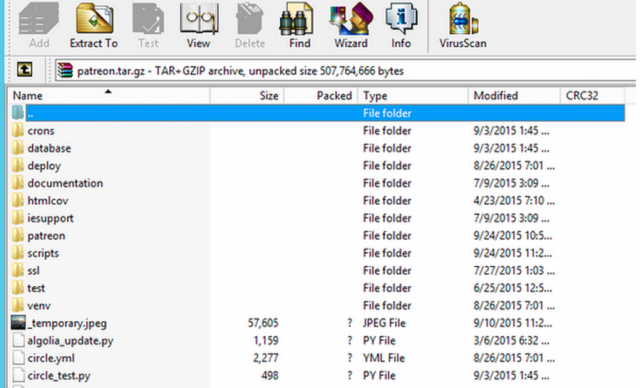 Hackers have published almost 15 gigabytes worth of password data, donation records, and source code taken during the recent hack of the Patreon funding website.

The data has been circulating in various online locations and was reposted here by someone who said it wasn't immediately possible to confirm the authenticity of the data. Security researcher Troy Hunt has since downloaded the archive file, inspected its contents, and concluded that they almost certainly came from Patreon servers. He said the amount and type of data posted by the hackers suggest the breach was more extensive and potentially damaging to users than he previously assumed.

"The fact that source code exists ... is interesting [and] suggests much more than just a typical SQL injection attack and points to a broader compromise," he told Ars. Referring to the inclusion of a 13.7-gigabyte database, he added: "At the very least, it means mapping individuals with the Patreon campaigns they supported. There's more data. I'll look closer once the restore is complete."