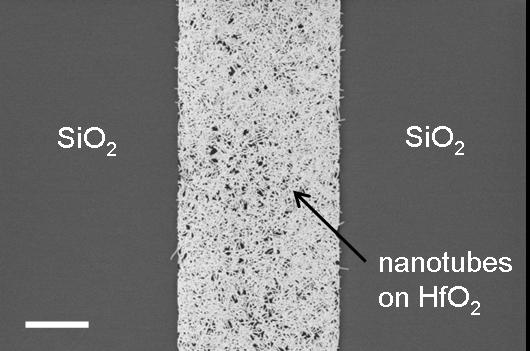 Carbon nanotubes are small and can be semiconducting, which makes lots of people excited about using them as a replacement for features etched in silicon. But there are two big problems: the reactions that produce them create a random mix of metallic and semiconducting nanotubes, and it's really difficult to get them to go precisely where you need them to in order to properly wire up a processor.

Now, a joint IBM-academic team has used those difficulties to their advantage. They've developed a process in which nanotubes are used to randomly wire up part of a chip that's then used to generate cryptographic information, providing an inherently secure on-chip facility for hardware-based encryption.

Most digital cryptography depends on the ability to generate a unique series of bits that acts as a key. Hardware-based cryptography generally relies on a key that's permanently wired into the chip itself. While effective, different techniques for storing the keys have various vulnerabilities, from being subject to external snooping to producing different results when the environmental conditions are changed.