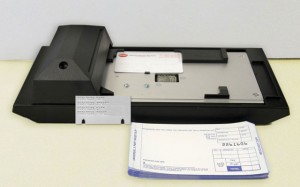 We've come a long way since this was the norm. (credit: eBay)

Security researchers are eager to poke holes in the chip-embedded credit and debit cards that have arrived in Americans' mailboxes over the last year and a half. Although the cards have been in use for a decade around the world, more brains trying to break things are bound to come up with new and inventive hacks. And at last week's Black Hat security conference in Las Vegas, two presentations demonstrated potential threats to the security of chip cards. The first involved fooling point-of-sale (POS) systems into thinking that a chip card is a magnetic stripe card with no chip, and the second involved stealing the temporary, dynamic number generated by a chip card and using it in a very brief window of time to request money from a hacked ATM.

Chip card technology—often called EMV for EuroPay, MasterCard, and Visa for the three companies that developed the chip card standard—is supposed to offer significant security benefits over the old magnetic stripe card system. Magnetic stripe cards have a static card number written into their magnetic stripe, and if a POS system is infected with malware, as was the case in the infamous Target and Home Depot hacks, then a malicious actor can take those card numbers and make counterfeit purchases with them. An EMV card, by contrast, uses a chip to transmit a dynamic number that changes with each purchase. That makes it a lot harder to steal a card number and reuse it elsewhere.

But that doesn’t mean it’s impossible. Late last year, security researcher Samy Kamkar demonstrated that he could calculate a replacement American Express card number based on the previous card number, replicate the credit card’s magnetic stripe information on a programmable chip, and use it to make purchases around town, much like the now-defunct Coin card. Kamkar was even able to do this with chip cards—the magnetic stripe on the back of every card has two tracks of data that tell card readers information like cardholder name, the card’s number, its expiration date, etc. Track 2 data will tell a card reader if the card has a chip and needs to be dipped—otherwise it can be swiped. Kamkar’s solution was to alter the Track 2 data and spoof the card reader to tell it that the card only has a magnetic stripe, no chip, thus bypassing the entry of a dynamic number.