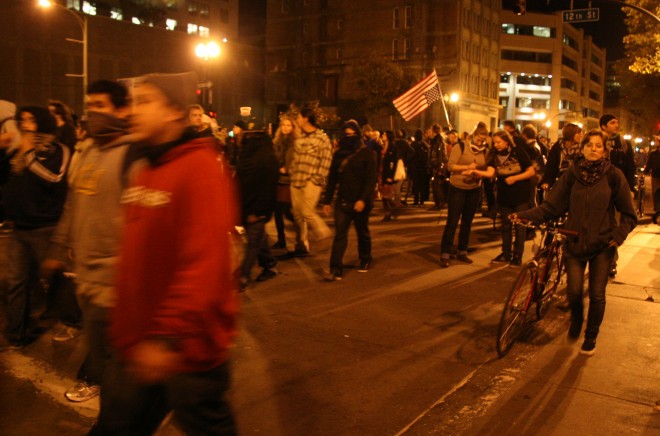 OAKLAND, Calif. — The city of Oakland, California enlisted police officers from 18 California police departments Tuesday, hoping to rid itself of the Occupy movement that had set up camp in a downtown plaza.

But the police forces’ violent tactics worked only temporarily, and have, for the moment at least, handed the Occupy movement a moral and political victory so big that not even Occupy protestors seem to recognize it.

The nation, and even much of the world, seemed to recoil in shock from the images coming out of Oakland Tuesday night, where police used tear gas and rubber bullets to disperse unarmed protestors, who built a camp in the city as part of the nationwide protest against an unfair political and economic system.

Critically wounded Marine veteran Scott Olsen became a rallying point for Occupy, following widely seen footage of protestors trying to carry him to safety in the midst of a tear gas assault. There were other pictures and videos: streets littered with rubber bullets, people in wheelchairs trapped in the tear gas, and bloodied faces and bruised bodies of unarmed protestors.

Oakland Mayor Jean Quan announced that people could reoccupy Frank Ogawa plaza, renamed Oscar Grant plaza by the occupiers in honor of a black Oakland man shot to death by transit police in 2009. When people arrived for the General Assembly, the occupation’s standard open meeting, the grassy area of the plaza was fenced off. But through the course of the evening, and not without violent conflict among the occupiers, the fences came down.

People fought each other over the fences, pulling at each other, some linking arms to protect the fence, and screaming, all while the GA went on in the distance. Despite the fears of those attempting to protect the fence, no police moved in after it went down. The GA proceeded through the evening undisturbed by anything but news choppers overhead and a turn-out too big for the sound system to cover.

But word came in that an attack was imminent on OccupySF across the bay, and a large contingent moved to get on the BART transit to join San Francisco’s Occupiers in Justin Herman Plaza. But when they arrived at the station they found it closed; BART wasn’t letting the occupation on in Oakland, or letting people off at Embarcadero, the station closest to OccupySF.

The roused crowd took to the streets, marching down Broadway towards the police station. They met no resistance. The police stayed a block away on all sides, and melted back in front of the path of the crowd, directing traffic away from the protestor-filled streets of Downtown Oakland. Many protestors were looking for a confrontation with police, but found none — staying peaceful and well behaved, if boisterous and peripatetic. The only property damage I observed were a couple incidents of graffiti-tagging, of which only one was definitely attributable to the OccupyOakland march. There were no broken windows or even overturned trash bins, and police stayed largely out of sight for the evening.

Across the Bay in San Francisco, the Occupation had warnings that police were massing at a nearby substation. They sent out people to check, who tweeted pictures of MUNI buses full of SFPD and Park police. The buses headed out, followed by OccupySF participants using their mobile phones to report back to the rest of the occupation, but they lost the buses near the entrance to the Bay Bridge.

A while later San Franciscans Aaron Muszalski and Ian Baker located the police at Treasure Island, the stopping off point of the Bay Bridge between San Francisco and Oakland.

“What we witnessed there was four MUNI buses, two transport vans, a [Department of Public Works] truck, two or three police cruisers, and four or six motorcycles,” says Muszalski, who found his role to be something between citizen journalist and tactical activist that night.

Baker and Muszalski lingered, tweeting about the police for around a half hour. Muszalski created a Foursquare check-in at “SFPD Caravan” and checked in while they waited.

“We realized they don’t have riot gear on … they were just smoking, talking, hanging out. They looked bored,” he said.

Eventually, the police caravan rolled out, and the occupiers followed them back to the city. As they slowly returned, Muszalski was struck by the strangeness of the situation:

“We’re a cop watching caravan now. We’re twittering to Occupy as we’re following this police caravan, and there’s this overlay of watching what’s going on in front of me, the motorcycles clearing traffic … but we’re also getting news back on the Occupysf stream,” Muszalski said. “We’re reading about people sorting themselves into people willing to be arrested, and not. People forming into a protective barrier, getting prepared for a respectful engagement that is presumably imminent.”

“For me in that moment there’s an awareness at the periphery of this experience, its hyper-contemporality,” Muszalski said. “This wasn’t possible two years ago. This is wholly new.”

The caravan, still being followed by Muszalski, Baker, and others, got off the freeway and turned away from the protest location, eventually stopped in the area where the chase started. 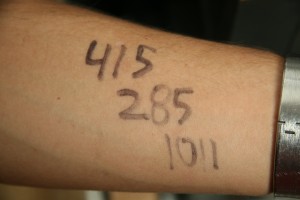 During the slow, tweeted protestor pursuit of police, OccupySF drilled for a police raid, practicing locking arms around their camp and removing vital gear from the site. As the hours wore on, many tired occupiers became paranoid, and every bus or van that went by startled people and sent them into conspiratorial speculations. Some occupiers went around writing the National Lawyer’s guild phone number on the arms of occupiers who didn’t already have a lawyer.

Five members of the San Francisco Board of Supervisors, several running for mayor, arrived and used the people’s mic to address the occupiers. They stayed put for hours, and many occupiers credited them for preventing the police raid.

On Thursday, the SFPD stretched credulity by telling ABC Channel 7 that the whole thing was a training exercise, resulting in a sarcastic local news report regarding the whole event. At the same time, OccupySF posted a picture of a notice given to businesses around the occupation warning of “…increased activity by the SFPD in the immediate vicinity of One Market Plaza starting around this evening’s commute.”

In Oakland the occupation was returning Thursday, growing from one tent in the reclaimed area Wednesday night to eight tents. OccupyOakland is rebuilding against the background of a campaign to recall Mayor Quan, calls for OPD to be disciplined, solidarity marches around the country and the world, and the New York City GA’s consensus to devote 100 sleeping bags and $20,000 for legal and medical expenses to OccupyOakland.

Bay Area media was questioning the cost of the operation for the cash-strapped city. But most of all, the wound inflicted on Scott Olsen, who is at this time breathing on his own, but facing surgery, turned public sentiment against the police action and the city of Oakland.

I stood among the ragtag occupiers Thursday, and saw the homeless giving hugs, a pretty girl who threw repeated temper tantrums, a smiling dreadlocked man stepping in to keep couple dog owners from letting their dogs fight, and any number of other hassles with tents, food, and logistics. 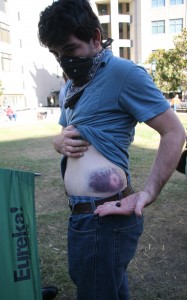 Sheamus Collins, a bartender from Dublin, showed off his rubber bullet wound.

Despite that, he is occupying with Oakland for the next four weeks of his vacation. It’s his sixth occupied site.

“I turned 30 here and they made me a book,” Collins said. “It’s amazing, I don’t know half the people that signed it, and it’s a full book.”

There were young clean cut boys next to the black clad anarchists, with the haze of marijuana smoke everywhere in the air mingling with the disgusting smell of the plaza’s mud. The Occupation has put out a call for straw to deal with the mud.

A tent with stacks of bread was the start of a new kitchen. Occupy Oakland was slowly negotiating the rebuilding of their improvised city, their corner of society devoted to making things better, without anyone being ready to say exactly what that means.

No one seemed aware of how crushing their political victory in the last 24 hours had really been.