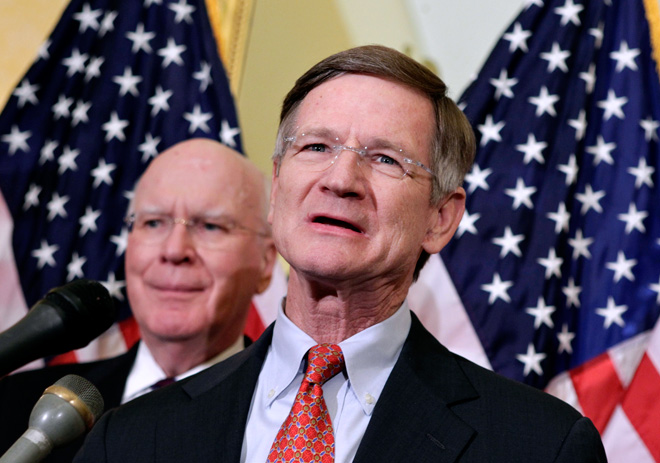 Rep. Lamar Smith (R-Texas), the chief sponsor of the Stop Online Piracy Act, said Friday he is removing a major provision of his bill that would force changes to internet infrastructure to fight online copyright and trademark infringement.

The announcement from the chairman of the House Judiciary Committee came a day after Sen. Patrick Leahy, the main sponsor of similar legislation in the Senate, announced the same move. For the time being, that means if the bills become law, ISPs won’t have to perform DNS redirecting of sites the attorney general concludes are facilitating online copyright and trademark infringement.

Both Leahy and Smith left open the possibility that redirecting could be brought back in at a later time. But the lawmakers appear to have conceded to opposition from security experts who say the plan would sabotage U.S. government-approved efforts to secure DNS against hackers and break the internet’s unified naming system by introducing lies into infrastructure.

“After consultation with industry groups across the country, I feel we should remove Domain Name System blocking from the Stop Online Piracy Act so that the committee can further examine the issues surrounding this provision. We will continue to look for ways to ensure that foreign websites cannot sell and distribute illegal content to U.S. consumers,” Smith said in a statement.

It was not immediately clear whether Smith would also remove the requirement that, if an ISP decided not to redirect, it must employ other censoring methods as outlined in the bill such as IP address filtering to prevent American citizens from visiting sites the attorney general maintains are dedicated to infringing activities.

The two bills are in response to Hollywood’s arguments that hundreds of thousands of jobs are lost every year due to pirate websites. On the other side, much of the tech world maintains that the open nature of the internet has created millions of jobs, that millions of people pay for content online and that copyright and trademark holders already have the legal tools to fight copyright infringement.

“Both proposals still threaten openness and freedom online with a range of overbroad measures,” said Matt Wood, a Free Press policy director. “We believe that the rights of content creators should be respected, but many problems remain with the approach these bills take to achieve that goal.”

Michael O’Leary, a Motion Picture Association of America vice president, continued dismissing technical criticism of the bill Thursday, saying the DNS issue was overblown (.pdf) and echoing a statement he gave in a SOPA hearing in November.

“We continue to believe that DNS filtering is an important tool, already used in numerous countries internationally to protect consumers and the intellectual property of businesses with targeted filters for rogue sites. We are confident that any close examination of DNS screening will demonstrate that contrary to the claims of some critics, it will not break the internet,” he said.

Internet experts maintain that the SOPA (.pdf) and the Senate’s Protect IP Act would break the internet’s universal character and hamper U.S. government-supported efforts to roll out DNS-SEC, which is intended to prevent hackers from hijacking the net through fake DNS entries.

However, both bills essentially grant the government the authority to bring lawsuits against so-called rogue websites and obtain court orders requiring search engines like Google to stop displaying links to them. They would allow rights holders to seek court orders instructing online ad services and credit card companies from partnering with the infringing sites.

In May, the PIPA legislation sailed out of the Senate Judiciary Committee that Leahy heads, but it was blocked from going to a Senate floor vote by Sen. Ron Wyden (D-Oregon) who invoked a rarely used Senate hold.

On Jan. 24, the Senate is expected to vote on whether to unwind Wyden’s hold, which would take 60 votes. On the House side, a Judiciary Committee markup of the SOPA bill was abruptly halted in December, and no House Judiciary Committee vote dates have been set.

What’s more, Rep. Darrell Issa (R-California) will conduct a hearing Wednesday before the House Committee on Oversight and Government Reform. Issa, the committee’s chairman, is calling prominent internet security experts and others to testify about the security ramifications of DNS redirecting.

Among those summoned are Stewart Baker, a former Bush administration Department of Homeland Security policy director, who has said tinkering with the Domain Name System “would do great damage to internet security.”