Bradley Manning to Face All Charges in Court-Martial 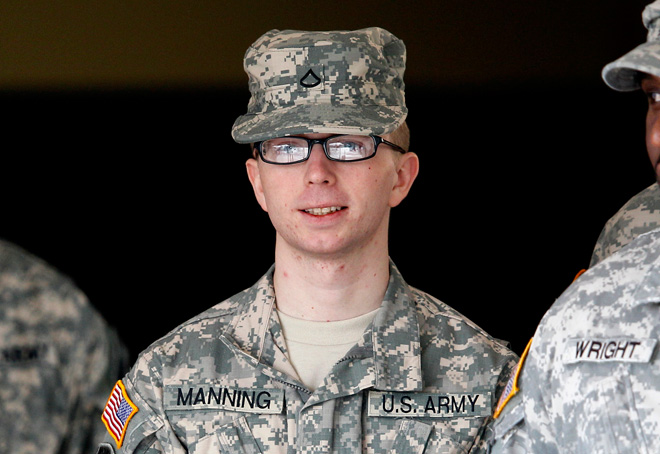 WikiLeaks suspect Bradley Manning is headed for a general court-martial, according to the commander of the U.S. Army Military District of Washington in an announcement released late Friday.

Maj. Gen. Michael Linnington, the general convening authority for the district, made the determination that Manning will face all 22 charges leveled against him, include aiding the enemy, wrongfully causing intelligence to be published on the internet knowing that it is accessible to the enemy, theft of public property or records, transmitting defense information, and fraud and related activity in connection with computers.

The most serious charge — aiding the enemy — carries a possible death penalty. Prosecutors have said they will not seek the death penalty. Instead, Manning faces life in prison if convicted of all the charges.

Linnington’s decision was no surprise to court watchers. In mid-January, the presiding officer of Manning’s Article 32 hearing, Lt. Col. Paul Almanza, recommended that Manning be court-martialed under all 22 charges, indicating that there were reasonable grounds to believe that Manning committed the offenses with which he was charged.

His recommendation was subsequently upheld by the special court-martial convening authority Col. Carl R. Coffman, commander of Joint Base Myer-Henderson Hall, who passed his recommendation in late January to Gen. Linnington. Linnington’s is the final decision in the matter.

It’s not known when Manning’s court-martial proceedings will begin, but the speedy-trial rule under the Uniform Code of Military Justice requires that suspects be tried within 120 days of being arrested or 120 days of the “preferral of charges.”

It’s unclear how many days are left on Manning’s 120-day clock. He was arrested May 26, 2010, more than 400 days ago. But the countdown on his proceedings was halted at least twice, according to the Army. The first time was shortly after his arrest when his defense attorney requested a so-called “706-board” hearing to determine Manning’s mental health at the time of the alleged leaks. It was nearly eight months before the military conducted that hearing and several months more before it made its determination that he was mentally fit.

The clock also stopped for a period during which discovery evidence was being prepared and passed to the defense and security clearances were being obtained. The Army did not respond to inquiries asking how much time is left on the 120-day clock. A military expert with the Army told reporters last December that one of the first things Manning’s attorney likely would do if the court-martial goes forward is file a motion protesting the amount of time the military has held his client without a trial.

In online chats with former hacker Adrian Lamo,  Manning boasted of leaking a separate video related to the notorious 2009 Garani air strike in Afghanistan that Wikileaks has previously acknowledged is in its possession, as well as the large databases that later formed WikiLeaks’ most high-profile releases. Those include over 250,000 U.S. diplomatic cables, more than 400,000 U.S. Army reports from the Iraq War and some 90,000 reports from the Afghanistan War.