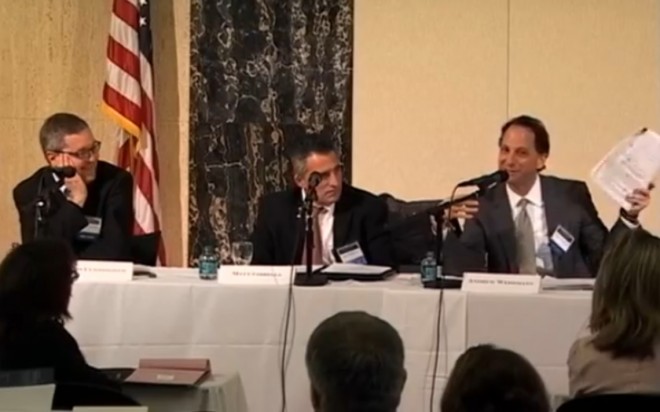 FBI General Counsel Andrew Weissmann (right) holds up a memo the ACLU is seeking, which the Bureau distributed to agents earlier this year, providing them with guidance on how to use GPS tracking.

In the wake of the Supreme Court’s decision earlier this year striking down the use of a GPS tracker on a suspect’s car without a warrant, the FBI issued two memos to agents with new guidelines for the use of the surveillance technology.

But the agency is withholding those memos from the public and has failed to respond to a records request submitted by the American Civil Liberties Union in July to obtain the documents.

On Tuesday, the ACLU filed a lawsuit against the FBI (.pdf), seeking the immediate release of the documents on the grounds that the public has a strong interest in knowing how the FBI is complying with the ruling.

“How the FBI implements the Supreme Court’s decision in Jones will shape not only the conduct of its own agents but also the policies, practices and procedures of other law enforcement agencies – and, consequently, the privacy rights of Americans,” the ACLU writes in its complaint.

Wired contacted the FBI Tuesday morning seeking the memos, but FBI spokesman Chris Allen said the general counsel’s office has determined that the memos will not be released because they are “privileged information,” as part of the attorney-client relationship, and that they would reveal FBI methods and procedures.

The FBI, however, has released similar documents in the past, (.pdf) and given congressional testimony, that provide information on methods and procedures performed by their public officers in the line of public duty.

“Contrary to the FBI’s claims, it’s not entitled to keep these memos secret,” she says. “The FBI’s own general counsel explained that these memos set out guidance regarding one of the most important Supreme Court decisions in a decade. For the FBI now to say it’s entitled to hide this guidance behind claims of attorney-client privilege is wrong, and it’s a claim we are prepared to challenge in court.”

The existence of the memos was disclosed last February, when FBI General Counsel Andrew Weissmann, speaking at the University of San Francisco Law School (see picture above, and video below), asserted that the FBI was in the process of issuing two documents to provide agents with guidance on the use of GPS tracking, in light of the Supreme Court decision.

One of the memos, Weissmann said, covered questions such as whether the Supreme Court decision also applies to other forms of transportation like airplanes and boats, and whether it applies at international borders.

The other memo, he said, discussed how the Supreme Court decision applies to other types of surveillance techniques “beyond GPS.”

Last January, the Supreme Court held that attaching a GPS device to an individual’s vehicle and tracking his movements equated to a search under the Fourth Amendment. Left unresolved by the justices, however, was whether law enforcement agents should always be required to obtain a warrant based on probable cause to conduct such tracking. The decision also did not address other types of GPS tracking, such as tracking done through the GPS location data gathered from mobile phones.

Weissmann told the audience that at the time of the Supreme Court decision, the FBI alone had about 3,000 GPS devices being used in the field. The week the decision came down, the department issued a memo to agents telling them to immediately “turn off all your GPS [devices],” and also provided guidance about how to retrieve their GPS devices from the field if they had not obtained a warrant in the first place to use them.

“[I]t wasn’t obvious that you could turn it back on to locate it because now you need probable cause or reasonable suspicion to do that, so we had to come up with guidance on how you could locate them without violating the law,” he said.