Assange Calls on U.S. to End ‘Witchhunt’ Against WikiLeaks 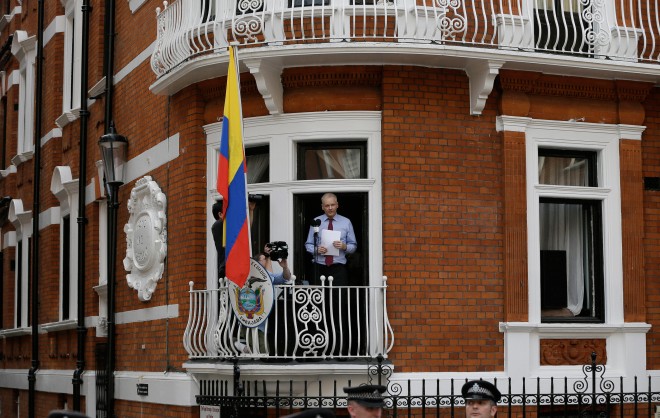 Julian Assange, founder of WikiLeaks makes a statement from a balcony of the Equador Embassy in London, Sunday, Aug. 19, 2012. AP Photo/Kirsty Wigglesworth

Standing on a first-floor balcony of the Ecuador embassy in London, WikiLeaks founder Julian Assange said the United States must “renounce its witchhunt against WikiLeaks.”

Assange said the U.S. was facing a momentous choice: “Will it return to and reaffirm the revolutionary values it was founded on, or will it lurch across the precipice, dragging us all into a dangerous and oppressive world in which journalists fall silent under the fear of prosecution and citizens must whisper in the dark?”

Assange stood on the embassy balcony, while dozens of UK police waited to arrest him if he left the embassy. Assange has a warrant out for his arrest for breach of bail if he leaves the embassy offices.

Speaking briefly to a crowd of supporters standing outside the embassy where he has been holed up for two weeks, Assange thanked the crowd for their resolve and generosity of spirit (full transcript).

“On Wednesday night, after a threat was sent to this embassy and police descended on this building, you came out in the middle of the night to observe,” he said. “But I knew there would be witnesses, and that is because of you. If the UK did not throw away the Vienna Conventions the other night, it is because the world was watching. And the world was watching because you were watching. So the next time somebody tells you that it is pointless to defend those rights that we hold dear, remind them of your vigil in the dark before the embassy of Ecuador.”

The Ecuadorean government announced last Thursday that it will grant WikiLeaks founder Julian Assange asylum, defying threats from the UK government that authorities would forcibly seize Assange from the embassy if Ecuador granted Assange’s request.

Ecuadorean Foreign Minister Ricardo Patino said at a press conference in Quito, that Ecuador had considered Assange’s claims that if extradited to Sweden to face an investigation for sex-crimes he would be further extradited to the U.S. where he would face political persecution and a military court trial for publishing documents that have angered the U.S. government. He said that Ecuador had come to its decision after failing to obtain assurances from Sweden that it would not extradite Assange to the U.S. 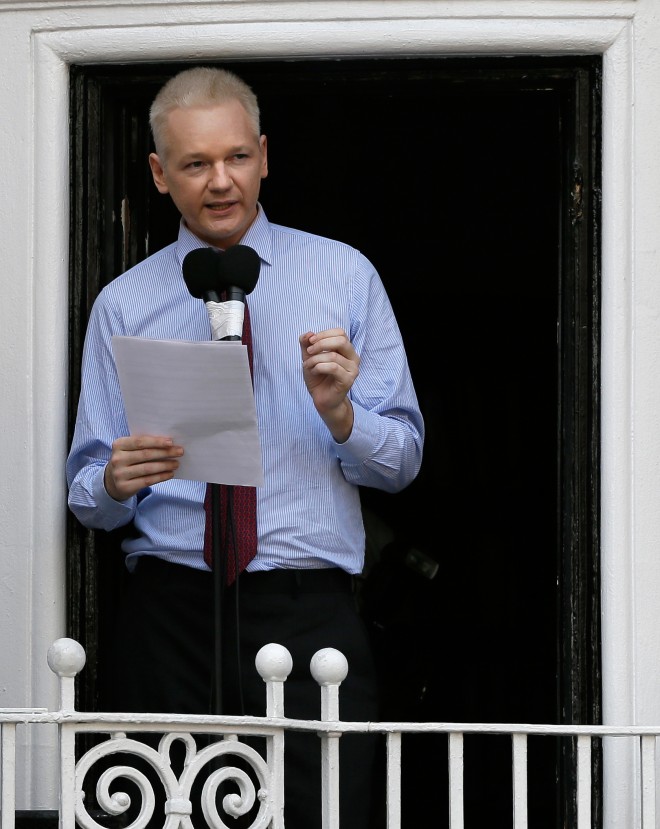 Julian Assange makes a statement from a balcony of the Equador Embassy in London. AP Photo/Kirsty Wigglesworth

On Saturday, the Sydney Morning Herald reported that it had obtained heavily redacted diplomatic cables showing that the Australian embassy in Washington was aware of an ongoing criminal investigation against Assange and that the Australian government considered the prospect of Assange’s extradition to the U.S. from Sweden sufficiently likely that its diplomats sought answers from the U.S. on “the direction and likely outcome of the investigation.” Diplomats also requested “early advice of any decision to indict or seek extradition of Mr Assange” so that Australian authorities could prepare their response to it.

The cables indicated that the U.S. could bring possible charges against him for espionage, conspiracy, unlawful access to classified information and computer fraud. Australian diplomats noted that any charges against Assange would be “carefully and narrowly drawn in an effort to avoid conflict with the First Amendment free speech provisions of the US Constitution,” according to the newspaper.

In the cables, Australian diplomats highlighted the US military prosecution’s reference to “several connections between [Private Bradley] Manning and WikiLeaks which would form the basis of a conspiracy charge.”

At a preliminary hearing last December against former U.S. Army intelligence analyst Bradley Manning, prosecutors revealed that investigators had found evidence on Manning’s computer of a chat log purportedly between Manning and Assange in which Manning allegedly asked Assange for help with cracking a password to help him obtain access to U.S. military documents.

In a chat, dated March 8, 2010, Manning asked “Nathaniel Frank,” believed to be Assange, about help in cracking the main password on his classified SIPRnet computer so that he could log on to it anonymously. He asked “Frank” if he had experience cracking IM NT hashes (presumably it’s a mistype and he meant NTLM for the Microsoft NT LAN Manager). “Frank” replied yes, that they had “rainbow tables” for doing that. Manning then sent him what looked like a hash.

If the U.S. government can prove that Assange aided Manning in cracking the password, it would be evidence of a conspiracy between the two to hack a government computer to obtain unauthorized access.

Ecuador’s Patino said on Thursday that the UK government should “respect the decision of the Ecuadorean government” to grant Assange asylum “and offer the necessary warranties so that both governments can act adequately and properly representing the international rights and the right of asylum.”

He also expressed outrage over the unprecedented threat the UK had made about raiding the embassy to arrest Assange and said that the UK had no right to interfere in the right of an individual to request asylum and the right of Ecuador as a sovereign nation to grant that asylum. No country, he said, had the right “to blackmail or threaten in any way” the sovereignty of any other country.

But UK Foreign Secretary William Hague said last week that the UK “will not allow Mr Assange safe passage out of the UK, nor is there any legal basis for us to do so.