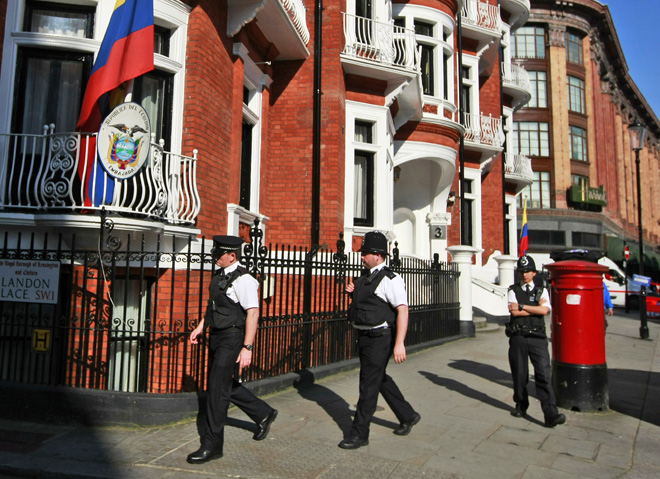 The Ecuadorean government announced Thursday that it will grant WikiLeaks founder Julian Assange asylum, defying threats from the UK government that authorities would forcibly seize Assange from the embassy if Ecuador granted Assange’s request.

“We have decided to grant asylum to Julian Assange,” announced Ecuadorean Foreign Minister Ricardo Patino at a press conference in Quito, to the sound of cheers from spectators.

“The UK government should respect the decision of the Ecuadorean government,” he said according to a live translation of his Spanish words, “and offer the necessary warranties so that both governments can act adequately and properly representing the international rights and the right of asylum. We also trust that the excellent relations that we have between the two countries will continue to be so and will remain intact, based on the principles and values that we have shared about democracy, peace, and life-quality that are only possible if you respect the fundamental rights of everyone.”

Patino said that Ecuador had considered Assange’s claims that if extradited to Sweden to face an investigation for sex-crimes he would be further extradited to the U.S. where he would face political persecution and a military court trial for publishing documents that have angered the U.S. government. He said that Ecuador had come to its decision after failing to obtain assurances from Sweden that it would not extradite Assange to the U.S.

The decision from Ecuador comes a day after officials claimed that UK authorities threatened to raid the Ecuadorean embassy to nab the WikiLeaks leader if the country didn’t hand over the fugitive.

“Today we’ve received a threat by the United Kingdom, a clear and written threat that they could storm our embassy in London if Ecuador refuses to hand in Julian Assange,” Patino told reporters on Wednesday.

On Thursday, Patino expressed outrage over the unprecedented threat and said that the UK had no right to interfere in the right of an individual to request asylum and the right of Ecuador as a sovereign nation to grant that asylum. No country, he said, had the right “to blackmail or threaten in any way” the sovereignty of any other country.

Following Ecuador’s announcement the UK Foreign Secretary William Hague said that the UK “will not allow Mr Assange safe passage out of the UK, nor is there any legal basis for us to do so.

Assange has a warrant out for his arrest for breach of bail if he leaves the Ecuadorean embassy so passage for him out of England, under diplomatic cover, can only occur if U.K. authorities agree to let him go.

Assange appeared in person at the Ecuadorean embassy in London on June 19 seeking asylum and has been holed up there ever since.

Assange asserted that Australia, his native country, had no plans to protect him, which put him in a state of “helplessness,” according to a statement from Ecuador’s foreign ministry at the time. For this reason, he sought Ecuador’s protection through political asylum.

U.K. authorities issued the warrant for his arrest after he requested asylum, saying he had breached his bail conditions by staying overnight at the Ecuadorian embassy.

Even with his asylum granted now, UK police can stop the vehicle or helicopter he would be travelling in to get him out of the country.

But UK prosecutor Clare Montgomery, who was in an early court proceeding representing Swedish authorities, said that even if the U.S. requested extradition of Assange from Sweden, no such extradition could take place without consent from U.K. authorities.

Swedish authorities have said Assange would be imprisoned as soon as he arrived in that country and would have a court hearing four days after extradition from the UK to determine if he would have to remain in custody.

Assange was ordered to return to Sweden in June to face the allegations after the UK Supreme Court rejected a bid to re-open his appeal case there. The judges gave him a two-week reprieve before extradition proceedings would begin, saving him from being immediately ejected from the country.