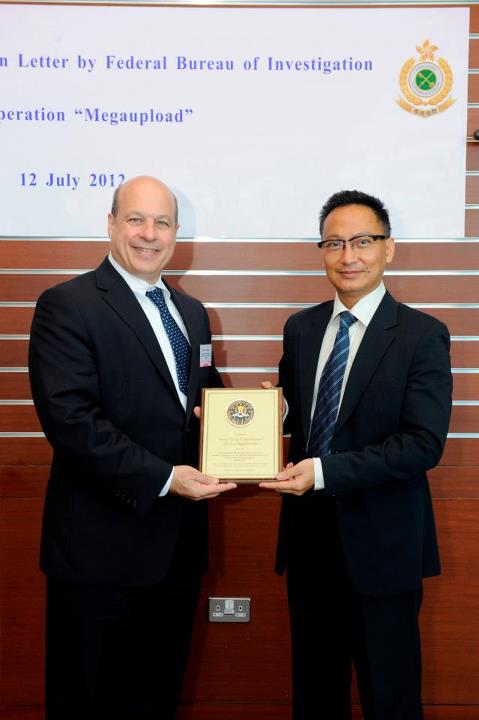 Though the U.S.’s copyright case against Megaupload appears to be in trouble, in Hong Kong, consulate official Matt Matthews (left) presented a letter from FBI Director Robert Mueller to Hong Kong Customs and Excise Department Commissioner Clement Cheung thanking him for HKCED’s cooperation.

Kim Dotcom has scored another legal victory after a New Zealand High Court judge upheld a ruling that the United States must show the evidence it has against Kim Dotcom and his Megaupload co-accused, prior to their extradition hearing in March.

In dismissing the U.S. appeal of a lower court ruling, Justice Helen Winkelmann found that the country seeking an extradition “must have an obligation of candor.”

This requires the country in question to disclose to the court any evidence gathered that could affect the decision on whether the threshold for extradition has been met.

Kim Dotcom, the outsized and outspoken founder of the file-sharing service Megaupload, is accused by the U.S. of running a criminal racket that pulled in hundreds of millions of dollars, promoting piracy. The FBI seized the company’s domain names, bank accounts and servers in January, just hours before New Zealand police raided his home in a paramilitary dawn raid, complete with helicopters. Dotcom counters that Megaupload was a legitimate file-sharing service that obeyed U.S. copyright takedown laws, despite not being a U.S. company.

The court ruled that Dotcom needs to see the evidence against him, otherwise his position in the extradition hearing would be “significantly constrained,” whereas the U.S. in turn would have “a significant advantage,” according to Winkelmann.

Dotcom has already had the original search warrant declared invalid, and both U.S. and New Zealand authorities were criticized by the court for their roles in sending copies of Dotcom’s seized hard drives to the U.S. via FedEx, without permission from the court.

“Justice Winkelmann ruled that the Bill of Rights not only protects Kim Dotcom’s rights, but also those of all New Zealand residents facing foreign legal action,” Rothken said.

The court victory doesn’t mean Megaupload’s fight to see the evidence is over, however.

“Our expectation is that that the United States through the Crown lawyers [representing them in New Zealand] will appeal the judgment and further delay the extradition hearing,” Rothken says.

Rothken contends the U.S. will continue to stall the case through appeals and aim to win on process as it has a weak case. Asked how long the case can be delayed, Rothken says an appeals would go to the New Zealand Supreme Court “and we fully expect them to do so””.

Dotcom is also seeking in a separate hearing to unfreeze assets seized by police around the world, including New Zealand and the United States to pay legal fees for his defense.

None of Dotcom’s legal team has been paid since he was arrested for alleged copyright infringement.

Having racked up bills of $2 million, Dotcom’s lawyers are asking for that amount to be released — with a further $2 million cover future legal fees.

The filesharing tycoon is asking the court to release an $8 million government bond so that he can borrow against it, and also for permission to sell his luxury cars.

However, Dotcom’s New Zealand defense lawyer Willie Akel would not agree to a suggested sale price of $1.05 million for fifteen cars, saying “that’s a total fire sale – no-one in their right mind would agree to that.”

Justice Department spokesman Dean Boyd declined to comment on the ruling and or whether an appeal is planned.

However, the FBI already applauded Hong Kong Customs officials over the Megaupload raid in that territory, with pictures of the ceremony posted on the consulate’s Facebook page.

Via e-mail, Kim Dotcom says the photo only proves his point that the U.S. was more interested in the takedown of Megaupload than enforcing the law.

“The Hong Kong award ceremony demonstrates that the primary objective of the US government was the TAKE DOWN of Megaupload,” Dotcom wrote. “They are already celebrating because they got what they wanted and Obama’s fundraisers in Hollywood were a huge success.”