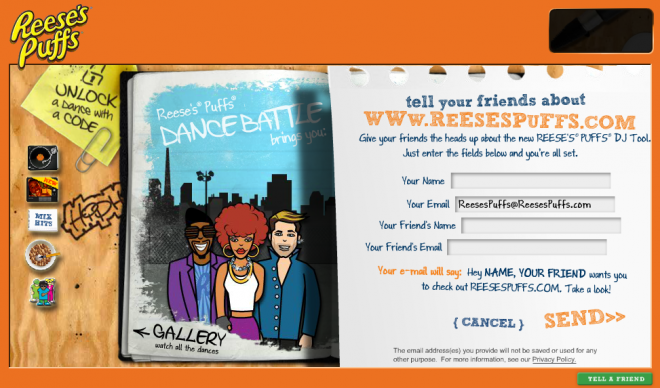 Children’s health and privacy groups asked the Federal Trade Commission on Wednesday to investigate what they called the “commercial exploitation” of youths through well-known companies’ online, viral advertising promotions.

At issue are the so-called “tell-a-friend” features embedded in child-focused advertising by McDonald’s, General Mills, Subway, Turner Broadcasting and Viacom. Advocates say encouraging kids to provide their personal e-mail addresses or those of their friends runs afoul of the Children’s Online Privacy Protection Act.

The groups seeking FTC involvement include the Center for Digital Democracy, the Consumer Federation of America, the Center for Science in the Public Interest and the Privacy Rights Clearinghouse.

The groups cited a McDonald’s website called HappyMeal.com that encourages kids to make a music video by uploading a picture or taking one with the webcam. The site makes a short clip featuring that picture placed on the body of a cartoon character. The child is then asked to share the video with friends by entering their e-mail addresses.

General Mills has a “DJ Tool” for kids at its reesespuffs.com site. Kids can share the site with a friend, asking for both their e-mail address and name, as well as their friend’s e-mail and name.

Both sites alert kids that “this is advertising.”

“These ‘tell-a-friend’ practices violate the Children’s Online Privacy Protection Act because they are done without adequate notice to parents and without parental consent. The FTC should act promptly to stop this commercial exploitation of children,” said Angela Campbell, a Georgetown legal scholar who is serving as the attorney for the groups protesting to the FTC.

We could not find that music-video feature on the HappyMeal site, and contacted McDonald’s for comment on the allegations and whether it removed the feature. However, a shared link in a e-mail provided to Wired did show a video made with the site, and we were then allowed to create our own. We were prompted to share the video with others but this feature did not work.

The fast food concern told AdAge that it would be “inappropriate” to comment on the lawsuit. McDonald’s did not return a call seeking comment.

General Mills and Viacom said they were not storing e-mail addresses and hence were not breaking the law. Subway said it complied with the law. Cartoon Network said, “We will review any allegations closely,” according to AdAge.