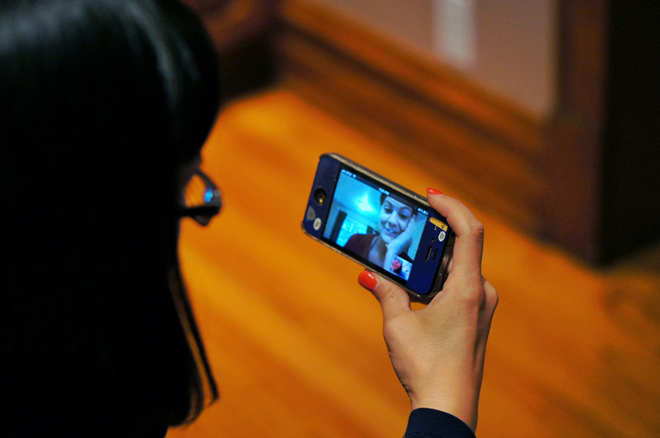 Facetime on an iPhone. Photo: BikeSandwich/Flickr

Amid a wave of backlash about its plans to block FaceTime over mobile, AT&T Senior Vice President for Regulatory Affairs Bob Quinn took to the company’s policy blog on Wednesday to defend its plans to block the popular app on its network unless users pony up extra cash for its new, expensive “Mobile Share” plans.

AT&T’s defense? The carrier asserts that it can block FaceTime all it wants, because the app comes preloaded on the iPhone and is not downloaded by the user. S. Derek Turner is the research director at Free Press. He has written extensively on a wide range of media and tech issues, including the state of broadband competition in the U.S., the role of the Universal Service Fund and the lack of female and minority media ownership.

But the rules adopted by the Federal Communications Commission to prevent carriers from blocking access to applications and websites over mobile connections are crystal clear: Mobile broadband providers cannot “block applications that compete with the provider’s voice or video telephony services.”

Nowhere in the rules will you find a mention of the term “preloaded.” And nor will you find it in the rest of the FCC’s nearly 200-page official order that accompanied and explained the agency’s rationale for adopting these rules. This is simply a distinction that AT&T is inventing, hoping that the FCC lets it poke another loophole in the already weak wireless Net Neutrality protections.

But AT&T may be yet again underestimating the FCC’s tolerance of its plans to rip off consumers and destroy Net Neutrality (it certainly underestimated just how negatively its customers would react). If AT&T attempts to make its customers pay twice for using the metered data allotment they already purchased, all in the name of forcing users to buy unlimited voice and text plans, it’s likely to be a bridge too far for the FCC to cross.

Indeed, in its order, the FCC cited AT&T’s past practice of working with Apple to block VoIP over 3G as one of the reasons it needed to adopt wireless Net Neutrality rules.

And if AT&T’s “preloaded” defense wasn’t insulting enough for AT&T customers, there’s more. In his blog post, Quinn wants you to know that everything is great because AT&T doesn’t block FaceTime over Wi-Fi. Which is good considering AT&T doesn’t own those internet connections in the first place.

AT&T also implies that forcing you onto plans with unlimited voice minutes in order to use FaceTime is absolutely necessary, because these “Mobile Share” plans were “designed to make more data available to consumers” (emphasis in original). But today, an AT&T customer with an iPhone 4S who is a moderate data user would likely opt into AT&T’s $70 plan, which includes 3 gigabytes of data and 450 voice minutes each month.

AT&T won’t allow that customer use mobile FaceTime. But if he or she “upgrades” to the low-end $95 Mobile Share plan, they’ll get unlimited voice, text and just 1 gigabyte of monthly data, and be free to use FaceTime. So it appears how much data you buy from AT&T actually has nothing to do with the company’s decision to block FaceTime.

Though it’s trying its best to hide it, the truth is that AT&T’s motivation here is to prop up its slowly declining voice and text revenue streams, which are expensive services that the open internet is making obsolete. If AT&T can weaken the FCC’s Net Neutrality protections at the same time, well that’s a bonus. The decision to block FaceTime likely will not be the last anti-consumer thing AT&T attempts as it tries to reassert its control over the communications ecosystem that the open internet pried away long ago.

Don’t let AT&T tell you how you can use the device and data you paid for. Make your voice heard.