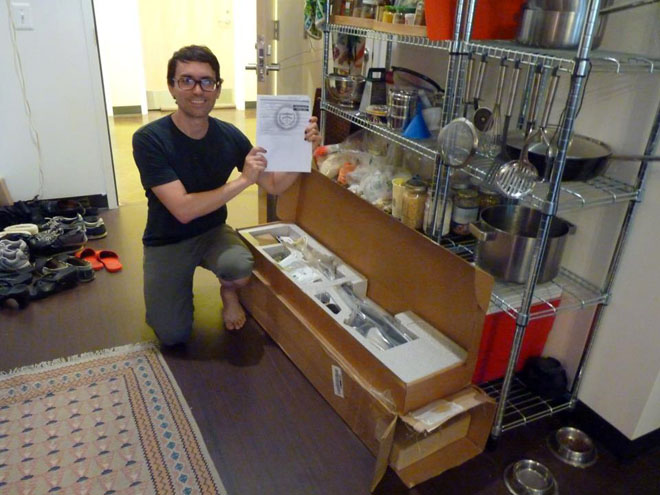 When D.C. resident Seth Horvitz ordered a flat-panel TV on Amazon, he didn’t expect to get a military-grade assault rifle in return.

Horvitz ordered the TV, a Westinghouse 39-inch LCD, for about $320 from a third-party electronics seller on Amazon.

On Tuesday evening, a large, oblong box arrived at his doorstep via UPS Ground.

“When I saw some metal parts inside the box, I thought, ‘Maybe this is a TV stand or mount or something,’” Horvitz said in a phone interview with Wired.

“When I realized it was an assault rifle, it was pure shock and disbelief.”

Not being one to want a personal “shock and awe” arsenal of his own, Horvitz contacted the D.C. police. They immediately confiscated the box, which contained a semi-automatic Sig Sauer 716 patrol rifle. The police informed Horvitz that the gun was illegal in the District of Columbia. 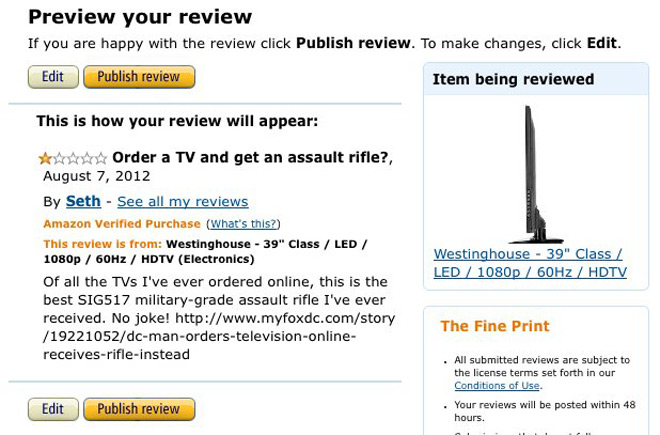 Seth Horvitz tried to leave this review for the TV he ordered, but Amazon rejected it.

An invoice found inside the box, Horvitz said, listed the sender as online gun retailer Gunbuyer.com. The invoice, for $1,590, was addressed to Independence Gun Shop, a gun store in Duncansville, Pennsylvania.

Jason Sidney, the gun shop owner, told Wired the incident baffles him, too.

“I’m not sure how it happened,” Sidney said.”We order a lot from the internet, but this is the first time this has ever happened.”

“I was more or less the middleman,” Sidney said. “The guy ordered stuff from the internet, it has to go through an approved federal firearms licensed shop…. You verify licenses on both ends, the shipper and the receiver, and you ship the gun to the approved ATF FFL holder.”

But last night he got a call from a police officer saying the gun has been mis-delivered and that it’s in impound waiting for him to pick it up.

When asked if he mistakenly received a TV: “That would be nice.”

Horvitz contacted Amazon and the third-party seller. He said that Amazon customer service basically gave him “the standard line of sending a dispute claim for sending the wrong product.”

The third-party Amazon seller, Horvitz said, denied any involvement with shipping the gun.

“When I contacted the seller about it, they denied knowing anything about it,” Horvitz said. “They acted surprised — ‘I’d never owned a gun in my life.’ Amazon shut down their account.”

The evidence points to a UPS mix-up. The outside of the box had two address labels on it – and Horvitz’s address was on top.

“There’s a UPS label on the outside of the box that matched my information, and had the tracking number,” Horvitz said. “But underneath my label — the plastic bag with my label on it — there was a UPS label affixed to the box with other information on it.

UPS did not immediately return a call seeking comment.

A reverse lookup of the tracking number on the package shows that the package originated in Daytona Beach, Florida, on Aug. 3. The package then hopped to Jacksonville, Florida; Baltimore, Maryland; and Landover, Maryland; before finally arriving at Horvitz’s doorstep on Aug. 7. 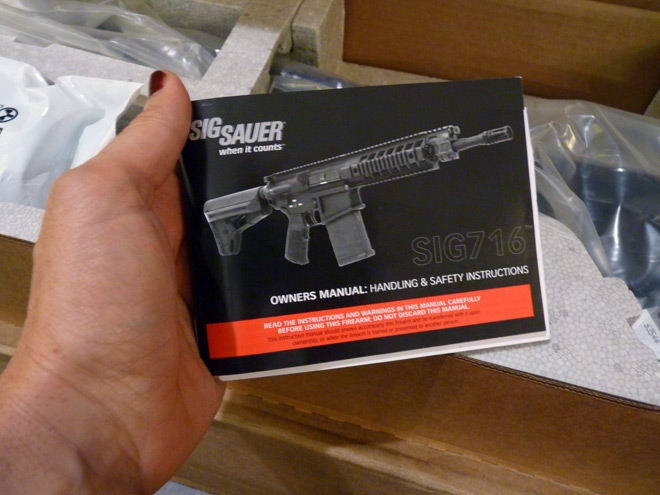 This is not a manual for a TV. Photo courtesy of Seth Horvitz

“[The police] were kind of confused at first,” Horvitz said. “They spent some time inspecting the gun, asking some questions about how I made the Amazon purchase…. They confirmed that it was a weapon that you can’t own in the district. They said by law that you can’t return this; we have to confiscate it and handle it for you.”