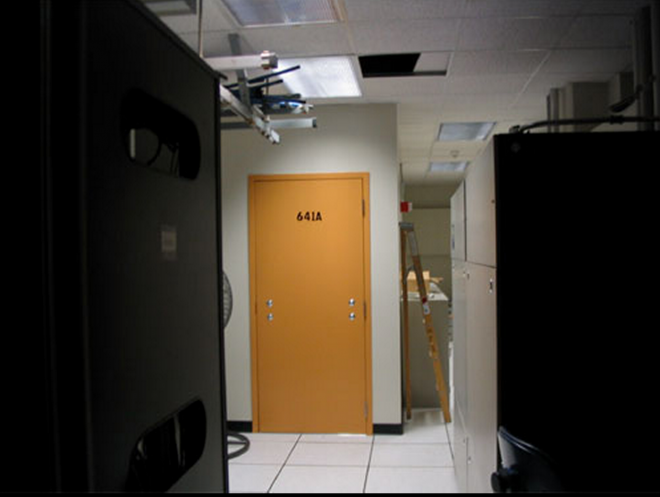 Whistleblower Mark Klein provided this photo of a secret room in a San Francisco AT&T switching center, which housed data-mining equipment that enables the government to spy on electronic communications.

The FISA Amendments Act, (.pdf) which is expiring at year’s end, allows the government to electronically eavesdrop on Americans’ phone calls and e-mails without a probable-cause warrant so long as one of the parties to the communication is believed outside the United States. The communications may be intercepted “to acquire foreign intelligence information.”

The government has also interpreted the law to mean that as long as the real target is al-Qaida, the government can wiretap purely domestic e-mails and phone calls without getting a warrant from a judge. That’s according to David Kris, a former top anti-terrorism attorney at the Justice Department.

The government does not have to identify the target or facility to be monitored. It can begin surveillance a week before making the request, and the surveillance can continue during the appeals process if, in a rare case, the secret FISA court rejects the surveillance application. The court’s rulings are not public.

The vote was 301-118 in favor of passage, with 111 Democrats and seven Republicans voting no.

Smith, while imploring the House to pass the measure, said the FISA Amendments Act “is one of the most important votes we cast in this Congress.” Terrorists, he added, “are committed to the destruction of our country.”

Rep. Zoe Lofgren (D-California) countered during a more than hour debate on the floor, urging the House to defeat the measure. “I think the government needs to comply with the Fourth Amendment to the Constitution all the time,” she said. “We can be safe while still complying with the Constitution of the United States.”

Rep. Dan Lungren (R-California) demanded that his colleagues support the bill. “This is critical to the protection of the American people,” he said.

Rep. Trey Gowdy (R-South Carolina), in a passionate plea, sided with Lungren.  ”Intelligence is the lifeblood of our ability to defend ourselves,” he said. Moments later, he added: “Are we to believe that the Fourth Amendment applies to the entire world?”

But the future of the spy powers remains murky, despite the rhetoric on both sides of the political aisle in the House.

Sen. Ron Wyden (D-Oregon) has put a hold on the matching bill in the Senate. Among other reasons, he said the government should disclose how many Americans’ communications have been intercepted under the law, which was adopted in 2008 as a way to legalize the Bush administration’s warrantless wiretapping program that was initiated in the wake of the Sept. 11, 2001 terror attacks.

The intelligence services say such an accounting is not possible and may not even be legal. Though even broad outlines of the NSA’s collection program are classified, presumably the NSA is collecting a staggering amount of Americans’ conversations, but only examining a small slice of them.

The House version extends the spy powers until Dec. 31, 2017. The similar bill in the Senate, which in May passed the Senate Intelligence Committee and the Senate Judiciary Committee last month, extends the powers for three years.

The American Civil Liberties Union, in a letter (.pdf) signed by 20 rights groups, urged the House to oppose the measure. The groups echoed Wyden, saying if the measure is passed, lawmakers should require the Obama administration to publicize how often the act vacuums Americans’ communications and to ensure that “information collected under the FAA is not repurposed for government uses unrelated to national security.”

Many Democratic lawmakers, including Rep. John Conyers (D-Michigan), were willing to extend the spy powers for three years, while adding in the safeguards that Wyden and the ACLU noted. “That’s a compromise you can’t turn from,” Conyers said.

For his part, Wyden has barred the Senate from a routine vote on the bill by invoking a little-used legislative power — called a hold — to block lawmakers from taking a procedural consent vote. Instead, he demands a floor debate that can draw out the approval process indefinitely via the filibuster. Still, Wyden said he would be willing to agree to a short-term extension, instead of seeing the spy powers lapse December 31, as a way to give lawmakers more time to reach a deal.

The National Security Agency told lawmakers that it would be a violation of Americans’ privacy to disclose how the measure is being used in practice. The NSA said the “NSA leadership agreed that an IG (Inspector General) review of the sort suggested would further violate the privacy of U.S. persons.”