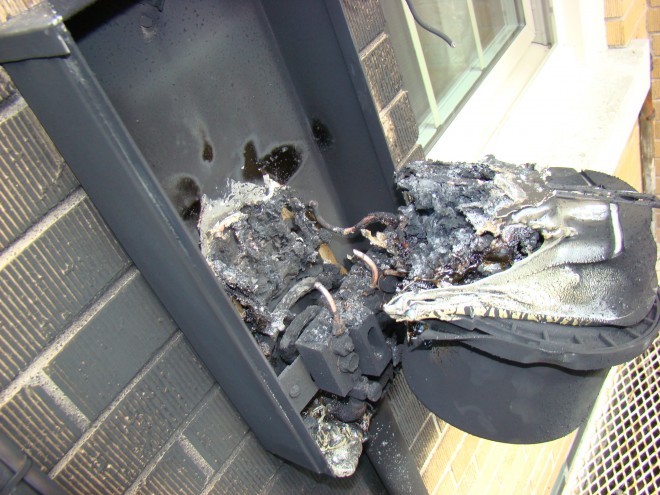 A General Electric smart meter after it burst into flames at a home in Illinois. Image courtesy of Shirley Bayliff

In June 2010, Shirley Bayliff was sitting at the piano in her suburban Illinois home, giving music lessons to a student, when she heard a “pop” outside the house before the power went out.

When she and her husband looked out the window, they saw five-foot flames shooting out from a new General Electric smart meter their utility company had installed as part of a pilot project. “Very, very scary,” she told Crain’s Chicago Business newspaper.

Apparently Bayliff isn’t the only who got a surprise from her smart meter.

Since then, two more of the 130,000 smart meters Commonwealth Edison installed in the area have burst into flames, one in 2011 and one this last July, according to the newspaper.

ComEd recently disclosed the fires, as well as information about 15 other overheating incidents that caused damage to smart meters, only after another utility in Philadelphia, Peco Energy, decided to suspend installation of smart meters there following a fire in a home and a dozen incidents involving overheating smart meters. 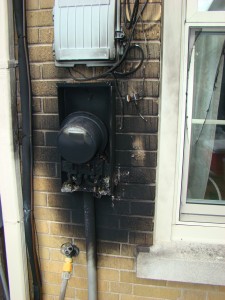 Fire from the smart meter melted part of a window screen (at right). Firefighters told the homeowner that her house would have been more damaged if the meter had been installed on a wood wall instead of one made from brick. Image courtesy of Shirley Bayliff

In the Philadelphia case, a neighbor called the fire department on a Sunday morning after hearing a pop and seeing sparks and flames shooting out from the meter of another house.

Overheating problems with smart meters have also been reported in Maryland by Baltimore Gas and Electric Co. All three utility companies are owned by the Exelon Corp, based in Illinois.

ComEd described the incidents in Illinois as “small fires.” But Bayliff, whose meter caught fire just 71 days after ComEd installed it, says the flames would have burned down her house if the meter hadn’t been installed on a brick wall.

“We saw huge flames,” Bayliff told the newspaper. “Luckily, there wasn’t much damage because (the house) was brick … When the firemen arrived, the lieutenant said if we lived in a wood house they’d be ripping off the shingles and hosing down the attic right now.”

ComEd denied the fire was caused by the meter and blamed the combustion on faulty house wiring where the meter was installed, which the company said was Bayliff’s problem. ComEd said faulty wiring was behind a second fire as well. The third reported fire is still under investigation.

The utility refused to pay the $2,900 in damages to Bayliff’s house – which included a melted window screen and the cost of replacing the wiring – but relented after Bayliff threatened to make it a public safety issue.

“Once I got their attention, they were very accommodating,” she told the paper.