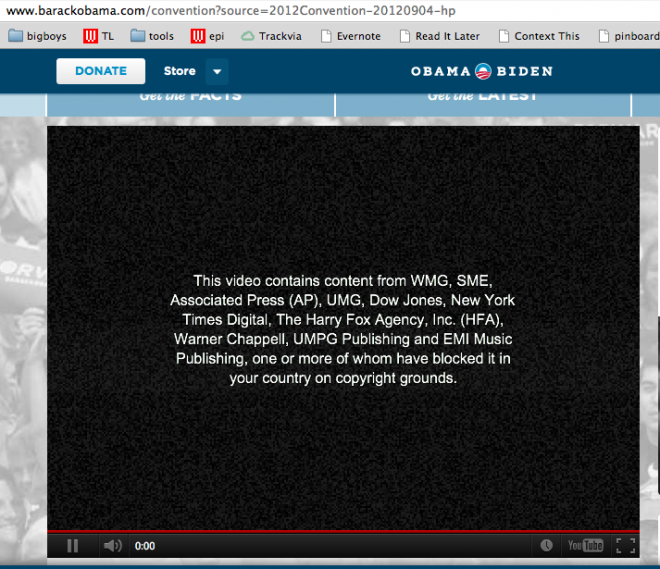 While First Lady Michelle Obama’s speech won rave reviews on Twitter Tuesday night, those who got inspired to try to watch the livestream of the convention on BarackObama.com or YouTube found the video flagged by copyright claims shortly after it finished.

YouTube, the official streaming partner of the Democratic National Convention, put a copyright blocking message on the livestream video of the event shortly after it ended, which was embedded prominently at BarackObama.com and DemConvention2012. Would-be internet viewers saw a message claiming the stream had been caught infringing on the copyright of one of many possible content companies:

This video contains content from WMG, SME, Associated Press (AP), UMG, Dow Jones, New York Times Digital, The Harry Fox Agency, Inc. (HFA), Warner Chappell, UMPG Publishing and EMI Music Publishing, one or more of whom have blocked it in your country on copyright grounds. Sorry about that.

When contacted by Wired for comment late Tuesday, Erica Sackin, an Obama campaign staffer who works on digital outreach, had no knowledge of the outage, asked this reporter for the url and then upon seeing the takedown, said, “I’ll have to call you back.”

On Wednesday morning, a campaign spokesman confirmed there was a “technical error on YouTube that inadvertently triggered a copyright message at the end of the live stream Tuesday night,” adding “We do not expect tonight’s coverage will be affected.”

After this story was published, the video was subsequently marked “private.” 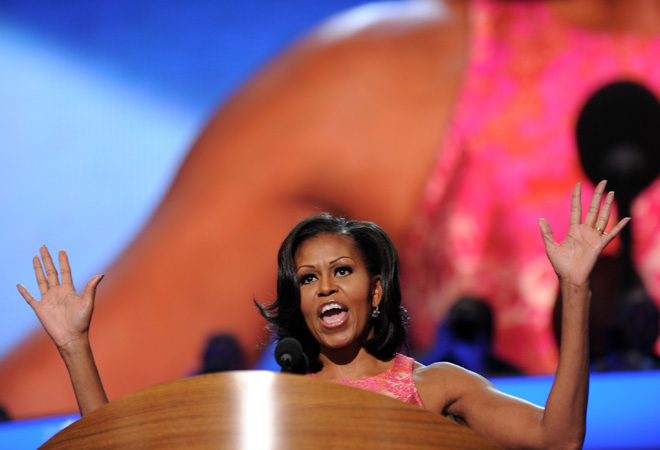 A YouTube spokesman downplayed the blockage: “After tonight’s live stream ended, YouTube briefly showed an incorrect error message,” he said via e-mail. “Neither the live stream nor any of the channel’s videos were affected.”

It’s not clear what he meant by none of the channel’s videos were affected as the video was unplayable.

The most likely culprit is YouTube’s pre-emptive content filters, which allow large media companies to upload content they claim to own and automatically block videos that an algorithm decides matches their own. That would make the glitch the second livestream copyright-policing snafu in the span of a few days: On Sunday, a similar algorithm at uStream interrupted the livestream of the Hugo science fiction awards. The award show included clips of copyrighted videos, though the algorithm didn’t know that the clips had been authorized.

In early August, an official NASA recording of the Mars landing was blocked hours after the successful landing, due to a rogue DMCA complaint by a news network.

Under the DMCA, sites have to respond promptly to written DMCA requests, but as services like uStream and Google court large entertainment companies as advertisers and content partners, they’ve created systems to make blocking automatic or to allow partners to put ads on videos they claim are infringing.