Inside the Mansion—and Mind— of Kim Dotcom, the Most Wanted Man on the Net 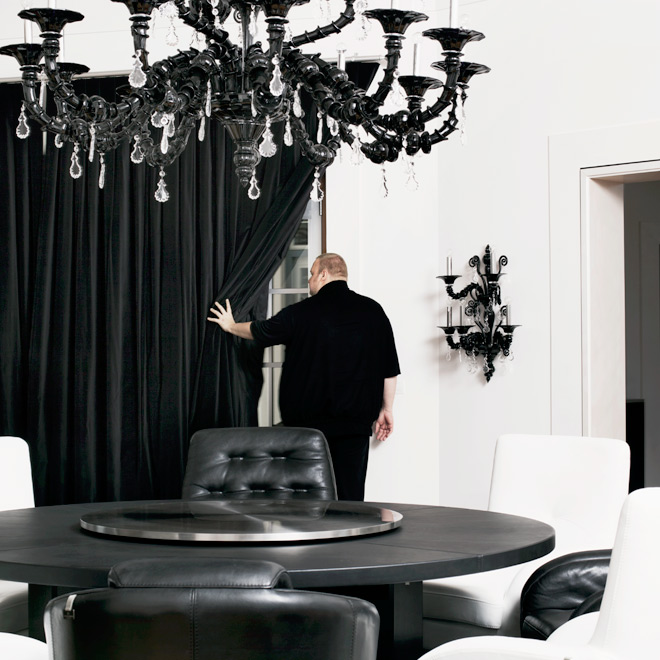 Please Choose One of the Following Statements:

His bed of choice is a remarkable piece of custom Swedish craftsmanship made by a company called Hästens. Each one takes some 160 hours to produce and is signed by a master bed-maker who lays out the most perfect matrix of horsehair, cotton, flax, and wool. Price after custom framing: $103,000. Kim has three such beds in his New Zealand mansion, one of which faces a series of monitors and hard drives and piles of wires and is flanked on either side by lamps that look like, and may well be, chromed AK-47s. This is Kim’s “work bed” and serves as his office. It was here that he returned in the early morning of January 20, 2012, after a long night spent on his music album, one of his many side projects.

Kim had spent the previous seven hours down the road at Roundhead Studios, laying down beats with songwriter Mario “Tex” James and Black Eyed Peas producer Printz Board in a studio owned by Crowded House frontman Neil Finn. They finished around 4:30 am, and Kim slid into the backseat of his Mercedes S-Class for the ride back to his mansion. Soon after leaving the parking lot, Kim noticed headlights behind them. He said to his driver, “I think we’re being followed.”

They pulled into Kim’s rented palace around dawn. His wife and children were long asleep in another wing. Kim walked to his upstairs chambers, showered and changed into his customary all-black sleeping costume, grabbed his customary chilled Fiji water from the upstairs fridge, and settled before the monitors of his work bed. Then he heard the noise. Also in this issue

A low, wavering bass, it seemed to be coming from outside. Kim couldn’t tell—the cavernous stone labyrinth of rooms swallowed and scattered sound, and the thick velvet blackout curtains blocked out everything else. Kim guessed it was his helicopter. He didn’t bother with details, he had a staff for that, but he did know that VIPs from the entertainment world were expected in from LA in celebration of his 38th birthday. Maybe they’d arrived early and Roy, his pilot, had been dispatched to meet them. A moment later the helicopter theory was confirmed by the sound of rocks from the limestone drive raining against the windows. Fucking Roy! He’d been told not to land too near—the thought was interrupted by a boom, echoing and close.

This noise was coming from the other side of his office door. It was heavy hardwood several inches thick, secured by stout metal bolts in the stone casement. Kim struggled to his feet as the door shook and heaved on its hinges. Someone or something was trying to break through. Now Kim heard other noises, shouts and bangs and the unmistakable stomping of boots on stairs. Intruders were in the house. Kim Dotcom realized he was under attack.

Across an ocean, hours before Operation Takedown began, the US Department of Justice had already tipped off a select group of journalists about the raid’s planned highlights. If you know nothing else about Kim Dotcom, about the federal case against him and his former online business, Megaupload, you’ve probably heard about the raid. The story played out like a Hollywood blockbuster. And it was a great story.

The scene: New Zealand. Lush and Green and Freaking Far Away. It’s the Canada of Australia, Wales in a Hawaiian shirt, a Xanadu habitat for Hobbit and emu.

And harbor home to the villain: Kim Dotcom, né Kim Schmitz, aka Tim Vestor, Kim Tim Jim Vestor, Kimble, and Dr. Evil. A classic comic book baddie millionaire, an ex-con expatriate German ex-hacker lording over his own personal Pirate Bay just 30 minutes north of Auckland. Kim Dotcom was presented as a big, bad man, larger-than-life, larger than his 6′ 7″, perhaps 350-pound frame. We saw him posed with guns and yachts and fancy cars. We watched him drive his nitrox-fueled Mega Mercedes in road rallies and on golf courses, throwing fake gang signs at rap moguls and porn stars, making it rain with $175 million in illicit dotcom booty.

His alleged 50-petabyte pirate ship was Megaupload.com, a massive vessel carrying, at its peak, 50 million passengers a day, a full 4 percent of global Internet traffic. Megaupload was a free online storage locker, a cloud warehouse for files too bulky for email. It generated an estimated $25 million a year in revenue from ads and brought in another $150 million through its paid, faster, unlimited Premium service.

Kim, they say, was like Jabba the Hutt, running a bazaar of copyright criminality with impunity from his Kiwi Tatooine.

The DOJ maintains that the legitimate storage business was only a front, like a Mafia pork store; the real money was made out back, where Megaupload was a mega-swapmeet for some $500 million worth of pirated material, including movies, TV shows, music, books, videogames, and software. Kim, they contend, was the Jabba the Hutt-like presence running this grand bazaar of copyright criminality with impunity from his Kiwi Tatooine, protected by laser break beams and guards and guns, CCTV and infrared and even escape pods—including a helicopter and high-performance sports cars. The FBI also believed Kim possessed a special portable device that would wipe his servers all across the globe, destroying the evidence. They called this his doomsday button.

Operation Takedown was carried out by armed New Zealand special police and monitored by the FBI via video link. Descriptions of the raid varied from one news outlet to another, but most included the cops’ dramatic helicopter arrival on the expansive Dotcom Mansion lawn and their struggles with a security system fit for a Mafia don.

We read that police were forced to cut their way into Dotcom’s panic room, where they found him cowering near a sawed-off shotgun. That same day, similar raids were under way in eight other countries where Megaupload had servers or offices.

This was justice on an epically entertaining scale, topped by a final cherry of schadenfreude: the rich fat bad man humbled and humiliated, the boastful pirate king brought down. He was cuffed and put in jail, his booty seized, his business scuttled upon the reefs of anti-racketeering laws. If all went as planned, he and his six generals would be extradited to the US to face a Virginia judge and up to 55 years each in prison. The message was, if it could happen to him, it could happen to anyone. Look upon these works, ye BitTorrenters of Dark Knight trilogies, sneak thieves of 50 Cent, and despair in your pirate bays. Justice was served, the end, roll credits. Yes, it was a great story.

The only problem was, it wasn’t quite true.