LifeLock’s IPO Is Unimpressive, But Not as Bad as Its Checkered Past 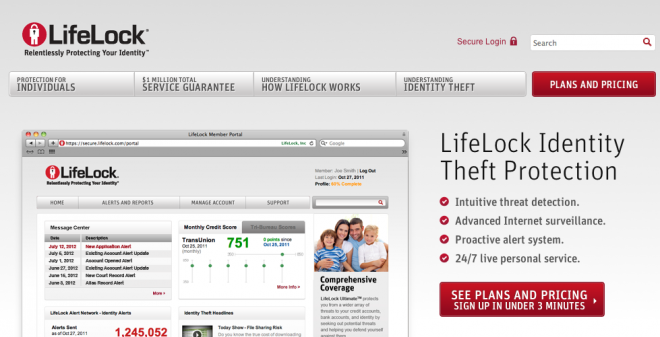 LifeLock, a company that promises to protect consumers from identity theft for $25, debuted on the public markets Wednesday, just two and a half years after the nation’s top consumer protection authorities fined the company $12 million for making false claims to Americans.

The IPO didn’t go very well, according to the AP.

The Tempe, Ariz., company dropped 30 cents, or 3.2 percent, to $8.70 in morning trading on Wednesday. The shares opened at $8.38, down 7 percent from the $9 per share that the initial public offering was priced at. The broader markets were mostly higher.

In 2010, the Federal Trade Commission levied a fine of $12 million against the company for deceptive business practices and for failing to secure sensitive customer data.

The FTC said that Lifelock, which advertises itself as “#1 In Identity Theft Protection,” engaged in false advertising by promising customers that if they signed up with its service their personal information would become useless to thieves.

“In truth, the protection they provided left such a large hole … that you could drive that truck through it,” said FTC Chairman Jon Leibowitz at the time, referring to a LifeLock TV ad showing a truck painted with the CEO’s Social Security number driving around city streets. Despite LifeLock’s promise to guarantee your good name, the CEO suffered identity fraud and the founder quit amidst allegations over his checkered past.

The FTC said the company used scare tactics to convince potential customers they would be unprotected from identity theft without its service, and of warning them in letters that they were at a high risk of identity theft.