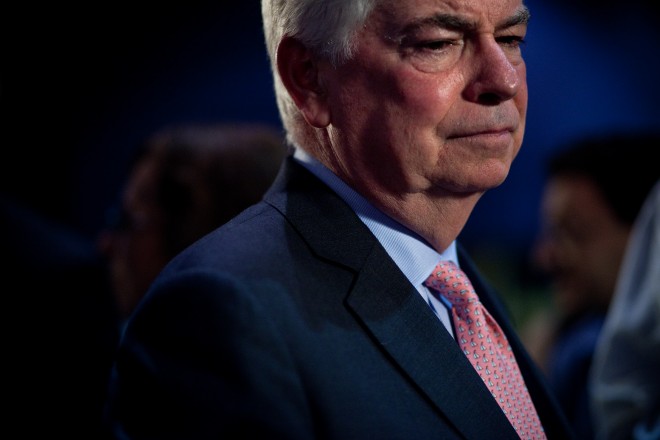 “My own view, that legislation is gone. It’s over. It’s not coming back,” Dodd told Wired in an interview after an appearance at San Francisco’s Commonwealth Club Tuesday night.

Still, he said the massive protest against the measures, which included online petitions and massive e-mail campaigns, “was over the top.”

SOPA, the more draconian of the two failed bills, would have required ISPs to prevent Americans from visiting blacklisted sites by altering the system known as DNS that turns site names like Google.com into IP addresses such as 174.35.23.56. Instead, for the blacklisted sites, ISPs would have had to lie to their customers and tell their browsers that the site doesn’t exist — a feature online security experts said would leave the internet insecure.

During the post-talk interview, Dodd also spoke of the anti-piracy cooperation from the nation’s major internet service providers, which have agreed to disrupt internet access for online copyright scofflaws.

After an internet subscriber’s fourth copyright offense, the historic plan calls for these companies to initiate so-called “mitigation measures” that might include reducing internet speeds and redirecting a subscriber’s service to a landing page about infringement.

The plan, pushed by the MPAA and the Recording Industry Association of America, is expected to begin by year’s end. He labeled the deal largely “educational.”

He said no backdoors would be installed in the internet’s backbone to detect copyright scofflaws. Instead, because of the public nature of BitTorrent file sharing, peer-to-peer users’ IP addresses are often exposed in the process, allowing private companies to capture them and forward them to the appropriate internet service providers.

“It’s P-to-P,” Dodd said when asked about backdoors. He said he was concerned about the possibility of backdoors until he was briefed on how the program works.

He also praised the UltraViolet initiative, backed by many of the motion picture studios. It’s a DRM platform granting movie buffs the ability to store their content in the cloud, once they have registered their name and birthdate. They can then watch their purchased movies on a wide range of approved devices. It’s the latest entertainment industry attempt to create an environment that both locks down content to prevent piracy, while trying to keep some convenience for users.

As for a legislative solution, that’s no longer an option as Dodd and the MPAA’s attempt to ram bills through a Congress elected thanks in part to hefty donations from Hollywood were stymied by a grassroots coalition of internet users.

“These bills are dead. They are not coming back,” Dodd said on stage at Commonwealth Club. He served 30 years as a Democratic senator from Connecticut, so he’s obviously in the know.

He said he has never seen a bigger protest to proposed legislation, which was killed in January after a huge online protest and internet blackout amid fears the anti-piracy legislation went too far in fighting online copyright and trademark infringement.

Many have feared the legislation would raise its ugly head again.

“I think it changed forever how people are going to address their elected representatives,” he said to a radio and 200-member live audience. Moments later, he said, “It was a transformative event.”

Dodd, who took the MPAA’s helm more than a year ago, said the MPAA is instead seeking cooperation with Silicon Valley to help reduce piracy.

“I think all of us agree,” he said, “that it’s fundamentally wrong to steal the genius of someone’s creations.”

He lauded Google for its August unveiling of altering its algorithm to lower search rankings of sites with high numbers of copyright-infringement removal notices, “which I applaud,” he said. Google has been striking deals with content providers in order to sell and rent movies, tv shows and books to Android users — though many of those companies have long considered Google’s stance on copyright to be a serious danger to their business models.

“That’s exactly the type of efforts we need,” he said during his 70-minute discussion, led by California Lt. Gov. Gavin Newsom. “It didn’t require a law to pass. Getting that type of cooperation is important.”

Nearing his retirement from the Senate in January last year, he said, Hollywood approached him to replace the retiring Dan Glickman, also a former politician.

“The industry came and asked me to get involved,” he said.

Federal conflict-of-interest rules prevent him from lobbying his colleagues for two years from the day he left the Senate, he said.