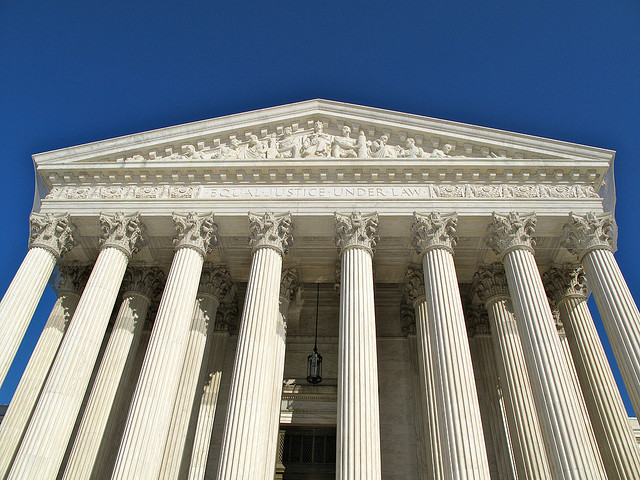 The Supreme Court on Monday will hear arguments on whether it should halt a legal challenge to a once-secret warrantless surveillance program targeting Americans’ communications, a program that Congress eventually legalized in 2008.

The hearing will mark the first time the Supreme Court has reviewed any case touching on the eavesdropping program that was secretly employed by the George W. Bush administration in the wake of the September 11, 2001 terror attacks, and largely codified into law years later.

Before the justices is the FISA Amendments Act (.pdf), the subject of a lawsuit brought by the American Civil Liberties Union and others. The act authorizes the government to electronically eavesdrop on Americans’ phone calls and e-mails without a probable-cause warrant so long as one of the parties to the communication is believed to be outside the United States. Communications may be intercepted “to acquire foreign intelligence information.”

The government has also, according to former top Justice Department lawyer David Kris, taken the ”position that surveillance of a U.S. person’s home and mobile telephones was ‘directed at’ al Qaeda, not at the U.S. person himself. [T]his logic seemed to allow surveillance of Americans’ telephones and e-mail accounts, inside the United States, without adherence to traditional FISA, as long as the government could persuade itself that the surveillance was indeed ‘directed’ at al Qaeda or another foreign power that was reasonably believed to be abroad.”

That bill was signed into law in July 2008, and the ACLU filed suit immediately claiming it was unconstitutional. A lower court judge tossed the suit.

But a surprise appellate court decision last year reinstated the challenge. The Obama administration asked the Supreme Court to overturn the decision and, in May, the justices agreed to do so.

The administration argues that the ACLU and a host of other groups don’t have the legal standing to bring the case. A lower court agreed, ruling the ACLU, Amnesty International, Global Fund for Women, Global Rights, Human Rights Watch, International Criminal Defence Attorneys Association, The Nation magazine, PEN American Center, Service Employees International Union and other plaintiffs did not have standing to bring the case because they could not demonstrate that they were subject to the eavesdropping.

A similar standing argument was made by journalists who opposed a provision of the 2012 National Defense Authorization Act that allows for indefinite detention of American citizens without trial, and in June, they won an injunction against the provision.

The lawsuit would return to New York federal court, where the Obama administration likely would play its trump card: an assertion of the powerful state secrets privilege that lets the executive branch effectively kill lawsuits by claiming they threaten to expose national security secrets.

The only suit to prevail against the program was filed by two American lawyers who convinced a court, using open-source evidence, that their communications with an Islamic charity were spied on, without warrants. However, the suit was dismissed by an appeals court, which found that the section of federal wiretap law the lawyers proved the government had violated lacked any provision for penalizing governmental lawbreaking.

The act expires at year’s end. President Obama, who voted for the act as a senator and presidential candidate in 2008, says it’s a top priority for Congress to reauthorize it.

Scotusblog has all the court documents.

The justices normally take weeks or months to rule after hearing a case.