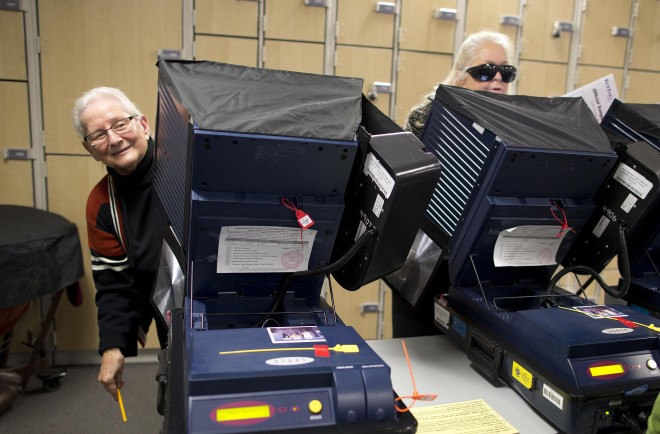 In an effort to accommodate voters displaced by Hurricane Sandy, New Jersey decided to allow voters this year to request ballots by e-mail and submit them via e-mail and fax.

But that solution has turned out to be a disaster after e-mail servers used to send and receive election ballots in at least two major counties got clogged or crashed on Tuesday under the weight of voter traffic.

At least one official in Essex County, which has 451,000 registered voters, decided to solve the problem by inviting voters to send their ballot request to his personal Hotmail e-mail address.

“Per Essex County Clerk Christopher J. Durkin: Displaced voters can email a request for a ballot at [email protected]…,” according to a post on the Facebook page for West Orange, NJ.

Not exactly a secure option, as security researcher Ashkan Soltani notes. Apparently Durkin uses his mother’s maiden name as the “password recovery” question for his account.

This, along with other problems New Jersey has experienced, prompted harsh words from one prominent election advocate.

“There’s just one word to describe the experience in New Jersey and that is catastrophe,” said Barbara Arnwine, president and executive director of the Lawyers’ Committee for Civil Rights Under Law in a press conference. “The county servers have crashed. Exxex and Hudson counties are emailed backlogged, and have announced they will not be able to process requests to vote online today.”

New Jersey decided to allow voters to cast ballots by e-mail and fax, after so many voters had to abandon their homes and neighborhoods as a result of Hurricane Sandy, and polling places had to be moved or closed due to electrical outages and flooding.

Voters were told to send an e-mail to county election offices to request a ballot, after which they could scan the ballot and e-mail it back to officials. But problems occurred when voters sent the large ballot image files back to the e-mail accounts, and overloaded them. Traffic slowed as a result, and only became exacerbated as more voters tried to send repeated e-mail requests to obtain ballots or mail in completed ballots.

“If they don’t get a response right away, they’re sending another request, so it ends up being multiple, multiple requests, and the server just came down, it was overwhelmed,” says Pam Smith, President of Verified Voting. “The state’s e-mail accounts were full.”

Smith noted that the problem occurred with the e-mail server, not the vote-counting server.

New Jersey is requiring voters who submit ballots by e-mail to also mail in their paper ballot, in response to concern from voting activists that e-mail could be intercepted and altered or spoofed. Voters in New Jersey who have been displaced are also being allowed to cast provisional paper ballots at any polling place in the state, instead of being limited to their neighborhood polling place.

Election problems throughout the country are being monitored by the Election Protection Network, a coalition of about 150 legal and civil rights groups from around the country, who have stationed election legal experts in problematic polling places in Ohio, Florida, and other locations, and have also set up a toll-free hotline to answer questions from voting and collect reports about problems.