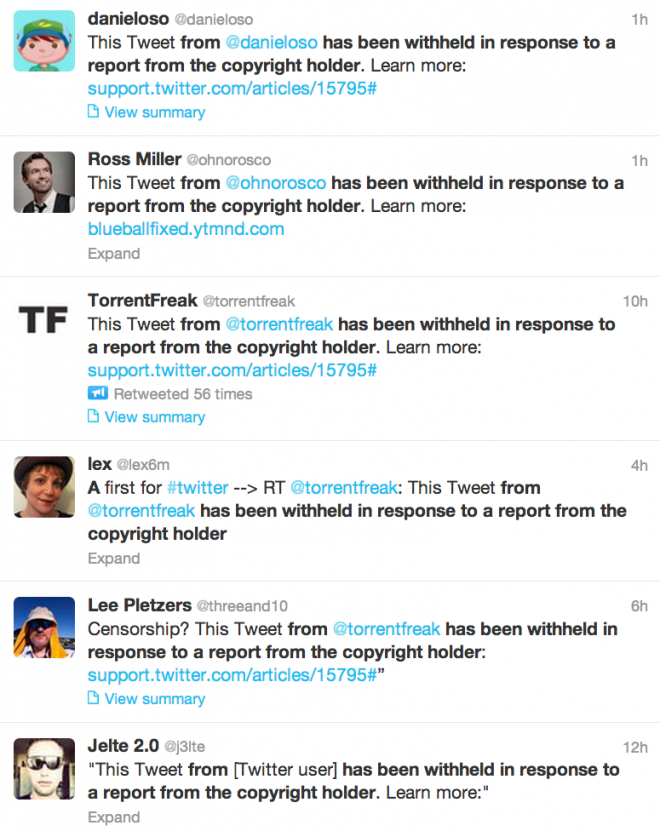 In an effort to be more transparent about disappearing tweets, Twitter has started adding a note to inform followers when it removes infringing links at the request of a copyright holder.

Twitter is obligated under the Digital Millennium Copyright Act to remove infringing links at the copyright holder’s request, to avoid legal liability. Failing to do so could make Twitter legally liable for infringing works posted on its site.

But until now, tweets with infringing links had simply disappeared into the ether, leaving users to question what had occurred with them.

Now, when a tweet is removed, the micro-blogging site leaves a message in the tweeter’s stream, saying that the tweet “has been withheld in response to a report from the copyright holder.” Twitter also leaves a link to its copyright policy.

Google’s YouTube also gives viewers a notice when it removes videos for this reason.

Jeremy Kessel, Twitter’s legal affairs manager, said in a tweet that “We now offer more transparency in processing copyright reports by withholding Tweets, not removing them.”

“Re-posting material removed in response to a DMCA notification may result in permanent account suspension,” Twitter notes on its website. “If you believe the content was removed in error, please file a counter-notification rather than simply re-posting the material.”

Twitter said it received 3,378 requests to remove copyrighted material in the United States during the first half of 2012.